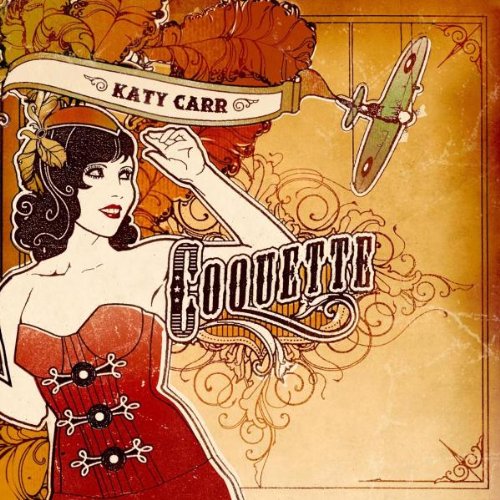 After laying bare the richly scandalous, hot-blooded current of the feminine mystique with the primal carnality of Screwing Lies (2001) and wilful sensuality of Passion Play (2003), Katy Carr returns to innocence with the unabashedly romantic Coquette. A concept album set in war-torn Britain in the 1930s and 40s, it’s a tender character-driven exploration of the emotional mêlée of the era, when the barbs of grief and wrenching loss collided with the striking up of feverish romantic encounters, when intense anxiety cloaked the country like an inescapable blackout. Here, a cheeky naiveté mingles with eroticism; spectral voices call out to one another, crossing planes of existence with gilded letters of passionate sorrow; a clifftop suicide is narrowly avoided through the power of song; and the spirit of one courageous woman finds itself embodied in another.

It is said that the only cure for coquetry is the finding of true love. But what happens when that love is taken away, sent to war or simply devoured by the force of its own demons? What happens when the one who was all is suddenly nothing but a collection of memories? Although much derided and often misrepresented in literature, the role of the coquette was an important one in the war years, performing for the troops, and for inspiration Katy needed look no further than the grande dames of frontline entertainment and Hollywood legends of the time. In her own words “the beautiful feminine energy” of Gracie Fields, Katharine Hepburn, Ginger Rogers and others infuses Coquette with a purity of virtue and inner strength. Of course, none of these women were themselves infallible, as the stridently percussive ‘Berliner Ring’ attests. A tribute to Marlene Dietrich, it recounts from an outsider’s perspective her desperation to break out of the confining borders of the East German capital and make her fortune in the wider world. The gentler ‘White Cliffs’ borrows the famous titular lyric from the Vera Lynn classic ‘We’ll Meet Again’ for the climax of a tale in which a hysterical woman intends to hurl herself into the sea in memory of her lost pilot lover, only to rescind at the pivotal moment.

Herself a qualified pilot with a lifelong fascination with all manner of aerial things, Katy Carr weaves her fascinating storysongs from a unique perspective. Born to a Polish mother and English father, early dalliances with her Catholic ancestry were replaced by an obsession with the wonders of flight. An RAF scholarship followed and Katy was soon soaring through the skies and gaining a whole new outlook on the immensity (and, conversely, the triviality) of things. References to flying and celestial matters are rife throughout her compositions and the songs on Coquette explore these themes in the context of war. The string-laden ‘Butterfly’, a woman’s sighing lament for a lover who perished in the wreckage of a Spitfire, conveys a bittersweet longing, a desire to experience the ultimate freedom that can never be fulfilled. Part of the beauty of the song is that we’re kept guessing about whether the story is being recounted several decades in the future, which is where the album begins. The inextricably linked ‘Star Song’ and ‘Sparkle’ finds Katy in the guise of an elderly woman reminiscing on the purest love of her life. And the parallels between the past and present don’t end there.

Tapping into the inherent duality of her English–Polish heritage and the stories of her maternal grandmother, Katy embodies both the liberator and the liberated. In researching the album, she met with a group of Polish war veterans at the Imperial War Museum in London, listening intently to their experiences of the tumult of combat and the anguish of personal sacrifice. The devastating ‘Army’ pays tribute to the men who fell and the families they left behind, inspired by the final scene of ‘Zulu’ where, in the face of certain death at the hands of a misunderstood enemy, Michael Caine experiences a profound compunction for his actions and at having deserted the woman he loves. The chanted reprise is a killer. Later, somewhere in the muddy churned up fields of occupied France, a weeping man is roused into song by a haunting chorus of accordions; he drains his hipflask and staggers to his feet to cry out to his vanished belle ‘Violetta’, gone to the ether. A stunningly theatrical performance sung entirely in French, it’s a sensual adieu to a greatly treasured flower. Sticking with the floral theme, ‘Orchidophile’ brings a different slant to proceedings as a woman sings of a man lost to a war not in the skies or in the trenches but deep within his own tortured mind.

But Coquette is not wholly elegiac. After all, it wouldn’t be a Katy Carr album without a sexual element and the jazzy, sultry ‘Erotic Days’ delivers in spades. “It’s about smelling each other’s fluids,” she explains, revealing that the inspiration for the song came from her discovery of ancient Japanese artworks depicting the female ejaculation. The kind of song that only the most daring frontline coquette might have attempted to thrill her troops, it’s an affectionate glimpse into a more innocent past when the act of intercourse still maintained some degree of mystery. More innocent still is ‘Come By The River’, a sweetly sung ode to true love, while the darker ‘Belladonna’ delves beneath the glitzy extravagance of the showbiz lifestyle. A heartfelt tribute to the bewitching likes of Edith Piaf and Billie Holiday, it takes its name from the Latin name for deadly nightshade, the hallucinogenic extract of which was often used to dilate the pupils of the women before they went on stage.

Ending as it began in the present, the album concludes with ‘Katharine McDowall’, a tribute to a woman from Dumfries who led an extraordinary life. A cowboy in her thirties, she eschewed her aristocratic heritage to live a near hermit-like existence in the Rocky Mountains for nigh on a decade, and later was a regular fixture at events like the Wicker Man Festival, even when confined to a wheelchair in her last years, where Katy first encountered her. A family member commented upon a startling resemblance between Katy and photos of the young Katharine and from that the song was born. To end an album chiefly focused on loss with a song about spiritual rebirth seems only right somehow.

The depth of thought and attention to exquisite detail that has gone into the making of Coquette shines through in every composition. An anachronistic gem, Katy Carr has created a fearlessly dramatic suite of songs with a very British feel that could only have come from such a unique artist.

By Alan Peddar Editor of Wears the Trousers Magazine

‘This album is a scrapbook of characters, places and stories from deep inside Carr’s imagination and it has been a mesmerising experience to glimpse into her world. I can’t fault this album. Quite simply it is a masterpiece.’ ***** The Music Critic

‘Quite simply a masterpiece’ ***** MUSIC CRITIC

‘Coquette is an original and fascinating work,’ **** DAILY EXPRESS

it reminds me of our love stay forever more…..

Sparkle all night long because you have come into my life