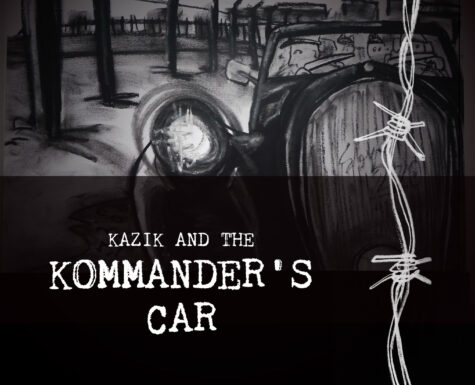 Nominated for an award at  London Short Film Festival, ‘Kazik And The Kommander’s Car’, directed by Hannah Lovell, produced by Katy Carr and with artwork by Galen Wainwright, is a DVD release like no other. Essentially a short documentary film, the DVD includes the music video and the song dedicated Kazik’s incredible story – with film extras that bring history to life through Kazik’s poignant first-hand account of his escape.

On June 20th 1942, Kazik Piechowski, a Polish boy scout, and three other political prisoners, disguised themselves as SS officers and drove out of Auschwitz, the German Nazi concentration camp, where they had been imprisoned for two years. The car they took was a Steyr 220 that belonged to the SS Kommandant, Rudolf Höss. Upon learning Kazik’s remarkable escape story, British-Polish songwriter Katy Carr wrote a song to honour it, called ‘Kommander’s Car’. In August 2009 Katy Carr went to Gdansk in Poland with the sole purpose of meeting the very man who inspired her musical composition.

‘KAZIK AND THE KOMMANDERS CAR is an inspiring story that reaches across generations. The film’s director has perfectly captured Kazik’s predicament and through Katy Carr’s songwriting skills makes the story relevant to today’s audiences.’  PHILIP ILSON,

There are no reviews yet.

Be the first to review “‘Kazik and the Kommanders Car’ DVD + ‘Kommanders Car’ Music Video” Cancel reply
We use cookies to improve your experience on our website. By browsing this website, you agree to our use of cookies.
Accept More info
0