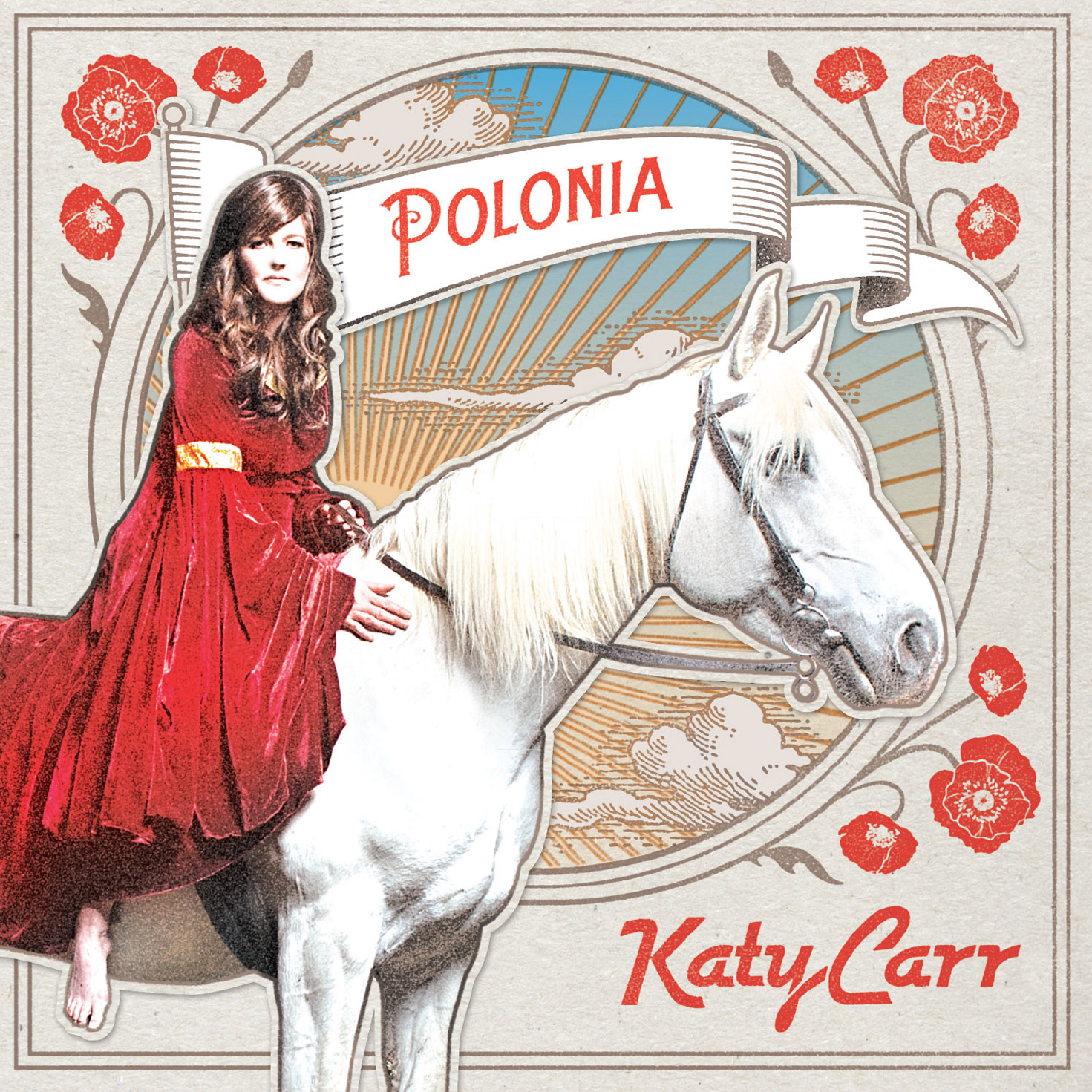 Polonia, the title of the inspirational new album from Katy Carr, is the Latin name for Poland and this is the realm the artist is celebrating in her music and song. As Katy Carr explains, ‘A strong brave, sovereignty proud of her freedom fighters and warriors who march to bring justice and peace to troubled times. Part of Katy Carr’s intention in making Polonia is to promote the longstanding, deep friendship between Britain and Poland, one threatened by present political and social prejudices. In a broader sense Polonia is a response to hate crimes endured by so many immigrants.
The record’s subject matter employs a large cast. This includes: Charlie Chaplin and the actress Pola Negri; the legendary Polish female spy Krystyna Skarbek, who inspired Ian Fleming’s Bond girl Vesper Lynd; the British composer Sir Edward Elgar; the first mathematicians (Polish) who deciphered Enigma in 1938 and Polish 1st Armoured Division General Maczek who was reduced to ‘Barman Stan’ in Edinburgh post WWII.

Polonia takes its title from Sir Edward Elgar’s gesture of devotion and loyalty to his close friend the fellow composer, and later president of Poland, Ignacy Paderewski GBE. Elgar wrote his Polonia piece in 1915, precisely 100 years ago this year, to benefit the Polish Victims Relief Fund: in 1915 Poland had been erased from the map of Europe, a consequence of having been partitioned 120 years previously between her neighbours Russia, Germany and Austria. At the end of World War I Poles were granted their country back.

The stories used to inspire Katy’s songs come from notable moments in Polish history and life – aspects of culture, military and intelligence exploits and incidents, intellectual invention, and science, as well as the loyalty and bravery that were the character traits required to carry them out.
Polonia, Katy Carr’s fifth album, is inspired by an under-developed area of Western historical research: World War II’s Eastern Front and the mighty military force of the free- dom fighters of Poland. Carr’s songs on Polonia explore those very people who during World War II fought not only for an independent Poland but also for the freedom of the West, especially Great Britain: Poland was not only Britain’s only ally for the first two years of the war but her largest military coalition force after the USA at the end of World War II.

Yet in the 1946 Victory Parade in London, every nation was celebrated that fought along- side Britain, except for the Poles, omitted by the new British government so as not to upset Stalin – only the Communist government elected in Moscow to rule Poland was invited.

In the song ‘My Beloved General’ Katy Carr portrays the devastating effects that the 1945 Yalta Conference, which ceded Poland to Soviet influence, had on the Polish World War II freedom fighter heroes. One of these was General Maczek, the subject of ‘My Beloved General’; stripped of his Polish citizenship, he worked in an Edinburgh bar to support his family. Known as ‘Barman Stan’, the humble Maczek was a grand Polish war hero; he had fought valiantly in the Polish Bolshevik War of 1920, helping stop the spread of Bolshevism throughout Europe. The lyrics ‘And we fought altogether for Freedom,’ offer apt words here.

‘I was first inspired to write this song when the late Lord Fraser invited me to perform at a charity to raise money to build a memorial to General Maczek in Edinburgh. From there my fascination grew and I met some of the Polish 1st Armoured Divisiom veterans at the British Embassy in Warsaw. My connection with the Division grew and grew: in December 2014 the veterans appointed me an honorary member.’

Sonic treasures like ‘Christine the Great’ emerge like an aural personification of Polonia. Told from the point of view of a British soldier, Carr pays tribute to Krystyna Skarbek, Winston Churchill’s favourite spy and the inspiration for the character Vesper Lynd in Ian Fleming’s Casino Royale.
Clearly Katy Carr’s inspiration is Poland’s very difficult history. But her music and author- ship is more an act of renaissance rather than requiem. She represents a new generation of light who no longer have to carry the heavy burdens of the past but can translate these ex- treme histories into acts of healing. At the push of a button this generation can change the world and this is what Katy Carr is endeavoring to do.

The excellent musicianship on this album is pronounced. In ‘Polonia’ and ‘Red Wine’ BJ Cole graces us with his pedal steel guitar, adding his unique and distinct quality, providing the music with an added ethereal quality. Steve Beresford gives sonic delight with electric insects on ‘Red Wine’ and a magnetic sounding plane from his electrical wizardry, setting the scene for Carr’s ‘Jumping with Zo’, in which General Elzbieta Zawacka, the only woman to jump with the Cichociemni (Silent and Dark), the Elite Polish Parachute regiment, jumps into the ‘dark sky.’ The tune contains a small hint of the ‘Hejnał,’ a Polish national musical symbol, which is played on a bugle in Krakow town square four times every hour on the hour. Beresford also adds mathematical flavours in a machine-like manner to the song ‘Bomba’ to which Herbaliser‘s Oliver Parfitt also brings vintage keyboard flavours.
In a lighter tone, the reference made to Charlie Chaplin in ‘When Charlie Met Pola’ is delightful – in his book My Trip Abroad (1921) Chaplin wrote that his fiancée Pola Negri was the most beautiful ‘thing’ that he had seen in Europe. Here renowned folk musician Guy Schalom performs the additional spoon playing.

Historically diverse and touching on until recently very controversial subjects, the songs ‘Bomba’ and ‘The Mathematician’ pay homage to those Polish mathematicians who in 1938 first deciphered the Enigma machine ciphers: Bomba was the name of the first Enigma counter-machine, designed by the Polish Cypher Bureau in 1938, by mathematician Marian Rejewski.

Katy Carr’s music and songs on Polonia open us up to a world that largely has been forgot- ten. Yet remains part of living history: Polish veterans of Stalin’s slave trade during WWII inform Katy Carr’s work.

The Polonia songs were written during Katy Carr’s residency at the Polish Institute and the Sikorski Museum in Kensington, London, whilst sitting at the desk of the great Polish Gen- eral Anders. Katy Carr is definitively a leader for the renaissance of Poland: she is no author of requiem. If Polonia and Britannia met again one can only imagine what the exchange would be. Just like Elgar’s Polonia symphony, Katy’s music also has a timeless and epic quality. Musicians BJ Cole, Steve Beresford, Guy Schalom, Oliver Parfitt (Herbaliser), Jez Coad (Simple Minds) and her music producer Nigel of Bermondsey have helped her to create an album that could have been written about any age of Poland, such are its epic truths.

Polonia is set to ignite Katy Carr’s path on fire.