Katy Carr is able to offer intergenerational outreach work in schools and with the elderly. This  is an additional option if required. Workshops with schools can be arranged and suited to adapt to the requirements of school, university curricula. With regards outreach work with the elderly, Katy Carr is able to visit sheltered housing, retirement homes and play concerts and interact with the residents with an emphasis of doing reminiscence work and gathering and documenting stories to benefit the local community archives. The aim here is to encourage intergenerational connections.
For examples of previous outreach work see the examples below :-
Option 1 : YOUTH OUTREACH SCHOOL WORKSHOP  : ‘MP joins Pershore class remembering Holocaust’ Direct link to event here : http://www.harriettbaldwin.com/content/mp-joins-pershore-class-remembering-holocaust 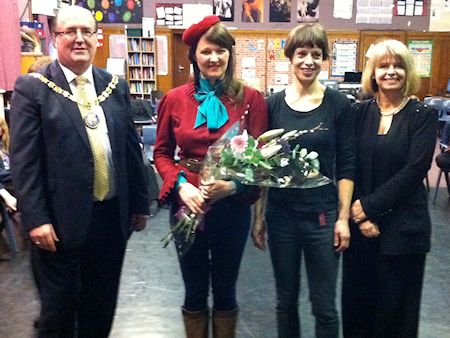 British born, Polish roots Katy was recently profiled on the BBC Radio 4 show Front Row about her current album which features songs about wartime Poland. Harriett commented: “It is important to continue to remember the terrible events that occurred in Europe more than seventy years ago.
“Katy told the moving story of a man who was imprisoned because he had joined the Polish boy scout movement and her rendition of the song was excellent.
“I applaud Pershore High School and Wychavon District Council for putting on this event and teaching the children an important lesson in a memorable way. I am hoping to visit the camp myself, later this year, and I will continue to support efforts to mark Holocaust Memorial Day.”
The event was run by Wychavon District Council’s Tom Piotrowski, who arranged for Katy Carr and Vanessa Woolf to perform, and the Council also supplied funding for the event.

Option 2 : ELDERLY OUTREACH –  The Escapologist Tour
Direct link to project on National Lottery Good Causes : http://www.lotterygoodcauses.org.uk/project/escapologist-tour
Artist Katy Carr’s project ‘The Escapologist Tour’ celebrates the stories of both British and Polish people who fought in or lived through the Second World War.
About the project
As part of the project Katy travelled to retirement homes across for British and Polish people across the UK to meet elderly residents and listen to tales of their war-time experiences, community in the 1940s, and how music and song played a role in their lives.

During this research one man in particular caught her imagination: Kazimierz Piechowski was a Polish veteran who had been imprisoned in Auschwitz as a boy for being a member of the Boy Scouts, but made a daring escape from the camp in 1942.
Inspired by this amazing story and the tales of the many people that she had met, Katy produced a film, ‘Kazik and the Kommander’s Car’, which she has screened in various places across the UK and Poland, along with live performances of music that she has written to evoke this period, and popular songs from 1940s Britain and Poland.
As a result of Lottery funding, The Escapologist Tour performances have bought veterans from two nations together, and helped their heritage and reminiscences to live on with hundreds of people from different generations and backgrounds.
For more information visit www.katycarr.com
The Escapologist Tour was funded by Arts Council England