FILM PREVIEW –
On June 20th 1942, Kazimierz ‘Kazik’ Piechowski, a Polish boy scout, and three other political prisoners, disguised themselves as SS officers and drove out of Auschwitz, the German Nazi concentration camp. The car they took was a Steyr 220 car which belonged to the then death camp SS Kommandant, Rudolf Höss. 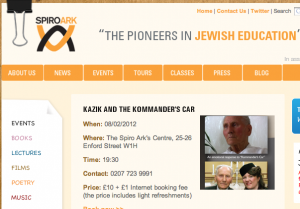 Upon learning about Kazik’s remarkable escape story, British songwriter, Katy Carr, who herself has Polish roots, wrote a song called “Kommander’s Car”. In her song she highlights how vital the last 80 metres were in this escape. For it is when Kazik has to ‘Do Something!’ that the drama becomes really pronounced. How will the starving prisoners in SS uniforms manage to persuade the Nazi guards to lift the final barrier and drive at last to their freedom?

In August 2009 Katy Carr went to Gdansk in Poland with the sole purpose of meeting and honouring the very man who inspired her musical composition. This DVD is the result of that legendary meeting and is comprised of three cinematic responses: – a documentary, a music video and a series of film extras.

In the short documentary, ‘Kazik and the Kommander’ Car’, we witness the songwriter’s first moments with Kazik, then 90, and see her play him her song “Kommander’s Car”, a tribute song to his do-or-die escape. Through Kazik’s strong and moving response to Katy’s song, we have a direct window into his memory and experience of the last 80 metres of his escape, where he and the other prisoners have driven to the outside checkpoint of Auschwitz, and all their lives depend upon five seconds of daring and inspiration.

The music video to the song Kommander’s Car is a visual response to this final and yet most dramatic moment. Here we witness Katy Carr dressed in the same disguise of the Kommander that Piechowski himself had to wear seventy years ago in 1942. When Kazik watched the music video for the first time he quoted, ‘So many people have tried to document Auschwitz, but this song and video are different. They play on the symbols of Auschwitz and the feelings of the escape. This is something new for the world.’

With over ninety minutes of film extras featuring interviews with Kazimierz Piechowski, viewers can further explore aspects of Kazimierz Piechowski’s inspirational character and story, his life as a boy scout, and what happened after his escape from Auschwitz.

All content directed by Hannah Lovell and produced by Katy Carr.

The short documentary ‘Kazik and the Kommander’s Car’ has been screened at: