Jerzy Bielecki was 19 years old, Roman Catholic and suspected of being a member of the Polish resistance when he was arrested by the Nazis in June 1940 and transported to Auschwitz, where the number 243 was tattooed on his arm.

Nearly three years later, Cyla Cybulska, her parents, her two brothers and her younger sister were crammed into a train with thousands of other Polish Jews and shipped to Auschwitz. Only Cyla — No. 29558 — would survive. Because of Mr. Bielecki.

Theirs was a tale of love and courage that would continue to resonate despite the nearly 40 years during which they were separated, both believing the other had died.

For his daring rescue of that one Jewish woman, Mr. Bielecki was recognized in 1985 as one of the so-called righteous gentiles by Yad Vashem, Israel’s center for Holocaust research and education. He died Thursday at 90 in Nowy Targ, Poland, said Stanlee Stahl, executive vice president of the Jewish Foundation for the Righteous, which assists non-Jews who risked their lives to save Jews. 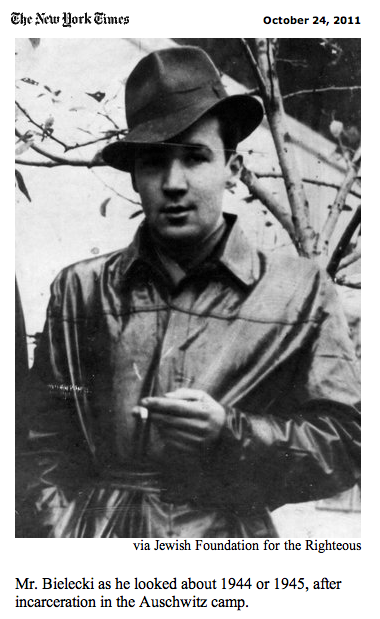 Mr. Bielecki — known as Jurek — was in forced labor in a grain warehouse at the concentration camp when several young women were herded through the door in the fall of 1943. “It seemed to me that one of them, a pretty dark-haired one, winked at me,” he told The Associated Press last year. “It was Cyla, who had just been assigned to repair grain sacks.”

Over the next eight months, although able to exchange only a few furtive words each day, they fell in love. Mr. Bielecki began planning their escape. Aided by a fellow inmate working in a uniform warehouse, he began piecing together an SS guard’s uniform. He obtained a stolen pass and a forged document authorizing the purported guard to take a prisoner to work at a nearby farm.

On July 21, 1944, Mr. Bielecki led Ms. Cybulska out of her barrack and onto a long path leading to a side gate where a sleepy guard said, “Ja” — yes — and let them pass. Hiding in the fields during the day, they walked for 10 nights until they reached the home of one of Mr. Bielecki’s relatives. Though much in love, Mr. Bielecki decided that he had to join the Polish underground. He found a hiding place for Ms. Cybulska with a Polish family.

They would not see each other again for 39 years. “Through a variety of misunderstandings each thought the other died,” Ms. Stahl said.

Ms. Cybulska would immigrate to the United States, marry another Holocaust survivor, David Zacharowicz, and eventually open a jewelry business in Brooklyn. In Poland, Mr. Bielecki started a family of his own and worked as the director of a school for car mechanics.

It was pure chance that in 1983 they would find each other again. By then, David Zacharowicz had died. “Cyla was at home talking to the Polish woman who cleaned for her, telling how this man had saved her and that she had been told he had died,” Ms. Stahl said. “The cleaning lady said: ‘I don’t think he’s dead. I saw a man telling the story on Polish television. He’s alive.’ ”

Ms. Zacharowicz tracked down Mr. Bielecki’s phone number in Nowy Targ one morning in May 1983 and several weeks later flew to Krakow to meet him. When she stepped off the plane, he handed her 39 red roses, one for each of the years they had not seen each other.

“He and Cyla saw each other about another 15 times,” Mr. Stahl said. “They were good friends for life.”

Mr. Bielecki was born in Slaboszow, Poland, on March 28, 1921. Ms. Stahl said she did not have information about his survivors.

In an interview with The Associated Press last year, Mr. Bielecki said he was “very much in love with Cyla,” adding: “Sometimes I cried after the war, that she was not with me. Fate decided for us, but I would do the same again.”

Cyla and David Zacharowicz had one child, Fay Roseman of Coral Springs, Fla. “My mother died in 2005. I have two children,” Ms. Roseman said Friday. “Without him, there wouldn’t be this family.” 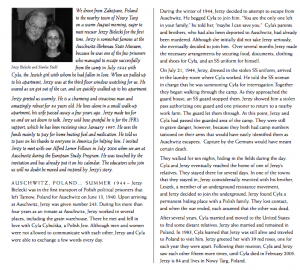 Jerzy Bielecki Dies at 90; Fell in Love in a Nazi Camp