The grandson of  Polish RAF WW2 pilot contacted me and i had to share this story with you and the pilot’s photo. 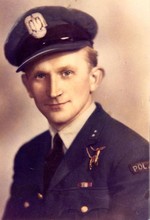 Bail Out
The story actually began before 1940; in fact it began with the German invasion of Poland in 1939, when the surviving pilots of the Polish Air Force decided that they wanted to continue the fight against the invaders by escaping the onrushing Wehrmacht and making their way to England….
Despite the language difficulties, these courageous men were readily accepted into the Royal Air Force, which was coming under increasing pressure to train sufficient numbers of pilots for the forthcoming Battle of Britain.
One such pilot was Czeslaw Tarkowski who found himself assigned, initially, to No.85 Squadron at Church Fenton there to be introduced to the Hawker Hurricane Mk.1. After a short spell with that Squadron, he quickly moved on to No.605 Squadron, based at the famous Biggin Hill sector station. By November 1940, Tarkowski was regularly involved in patrols over the Kent countryside, often ordered to take up a vulnerable position at the rear of the formation, with the job of keeping alert and preventing an attack from astern.
When the “scramble” call came on the morning of the 8th November 1940, Tarkowski made his way over to his Hurricane, N2649, call sign UP-O and was assisted into the cockpit by a member of the squadron ground crew.
It was still quite foggy when the flight got airbourne at around 9 o’clock, but once they reached 10,000 feet, there was clear blue sky all around. The flight had been ordered by ground controllers to meet an incoming raid and patrol the Maidstone and Tonbridge area.
Approaching the designated area, they were ordered to climb to 27,000 feet with the warning that “bandits are in front of you”. By now Tarkowski could just make out pairs of enemy aircraft in the distance, glistening in the morning sunlight.
With a closing speed in excess of 600 mph, the sky was suddenly filled with aircraft, twisting and turning as pilots fought to establish an advantage over their chosen victim. Briefly, a Messerschmitt Bf109 appeared in Tarkowski’s gun sight and instinctively he fired off a burst of gunfire from his eight Browning machine guns, but without result.
He was searching for another opportunity, when a loud bang in the nose of his Hurricane announced that he had taken a hit. As the cockpit quickly filled with smoke, his immediate thoughts were to avoid a pilot’s worst nightmare, that of fire.
Training had taught him to open the cockpit hood, invert the aircraft and simply fall out, but the choking smoke caused him to lose consciousness. Was this to be how it would end?
Fate smiled on Czeslaw Tarkowski that day, as he came to, dropping like a stone through the empty sky. Again his training kicked in and he successfully deployed his parachute and took in the view below as he drifted silently earthwards. Of his Hurricane, there was no sign whatsoever.
As he approached the ground an oak tree came up to meet him and it enveloped him in its branches. That was not the only thing that came to meet him. A group of farmworkers from Sissinghurst Castle Farm were coming towards him in a menacing fashion armed with pitchforks, sticks and an ancient double barrelled shotgun.
Assuming him to be a German, he was instructed to surrender. It took a while to establish his true identity and soon helping hands were assisting him and took him to a nearby house, where a doctor had been summoned.
His wounds comprised burns and a leg injury, which the doctor treated as best he could. The family living at the house were obviously taken by this courageous young flyer and insisted that he joined them for lunch. His post lunch slumber was broken by the arrival of an RAF sergeant and staff car that had arrived to take him back to Biggin Hill.
Bidding farewell to the family, Tarkowski was driven off, but encountered more hostility when the car stopped at traffic lights en route to Biggin Hill. After the sergeant had informed the crowd that he was, in fact, a Polish airman serving with the RAF, a lady stepped forward, opened her purse and offered Tarkowski five shillings !
What of Tarkowski’s Hurricane, N2649 and who was the unseen enemy who shot him down? The answer first of all lay in a hop garden at Harts Heath between Colliers Green and Staplehurst where the Hurricane had embedded itself deep into the ground.
Interestingly, some thirty odd years later, the site was investigated by local aviation historian, Ted Sergison, and a number of components were recovered. Ted informed me that one of the smaller fragments was cleaned and inscribed with details of the incident and he had the pleasure of meeting Tarkowski and presenting him with this unusual gift.
His assailant was thought to have been Major Gerhard Schopfel, flying a Bf109E attached to Jagdgeschwader 26 based at Caffiers in Northern France. Schopfel was, at the time, the Gruppenkommandeur of the Third Gruppe of JG26 and had been the recipient, in September of the Knight Cross of the Iron Cross, having accounted for 20 enemy aircraft.
By the end of the war his score has reached a staggering 45 victories. Czeslaw Tarkowski ended the war with the rank of Squadron Leader. He only ever scored a single aerial victory, claiming a Junkers Ju188 on the night of the 3rd March 1945 whilst at the controls of a De Havilland Mosquito of No.307 Squadron.
After the war, Tarkowski settled in England and had a successful career in aviation. Upon retirement, he moved to Hythe, thus restoring a Kentish connection so unexpectedly forged in November 1940.
Original article written by Graham Holmes – taken from the personal memoirs of Czeslaw Tarkowski .
Submitted by Matthew McCarthy – Grandson of Captain Tarkowski (1919-2001)
Matthew McCarthy from London
1940