Story of a Secret State, My Report to the World by Jan Karski

Story of a Secret State: My Report to the World by Jan Karski – review 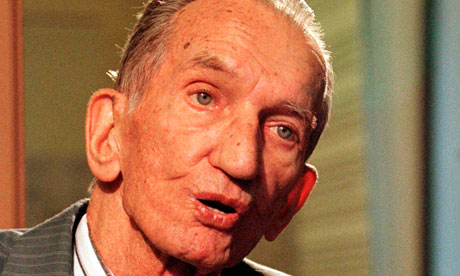 Jan Karski: his attempts to bring Poland’s plight to the attention of allied leaders failed. Photograph: Reuters/Popperfoto
When Jan Karski first published his chronicle of Polish resistance to the Nazis in 1944, all he hoped for was to ensure that Churchill and Roosevelt did not forget oppressed Poland. Apart from a tormenting interlude in a Gestapo prison, Karski had spent the years since 1939 crisscrossing Europe as a courier for the underground; he witnessed casual genocide in the Warsaw ghetto, and was smuggled into a concentration camp dressed as an Estonian guard to watch Jews being herded into railway carriages that were coated in advance with quicklime, which (he claims) corroded their flesh and ate them alive – an inexpensive prescription for mass murder, conserving precious canisters of Zyklon B.

Finally General Sikorski, the head of Poland’s exiled government who presided over a secret, abstract state like Christ’s unearthly church, dispatched Karski to deliver the news about the “final solution” to the allies. But Churchill wouldn’t see him, and Eden vaguely wished him good luck; he was told that FDR was busy, and though he secured an interview he left with no promise of help from the president. After the war Poland was quietly consigned to the Russians, who had enslaved it before the Germans invaded. On its first publication, Karski’s book appealed less for its admonition to humanity than because of the cloak-and-dagger skulduggery it described, complete with baffling disguises, daring escapes and uplifting evidence of sacrificial feats performed by ordinary human beings.
Eleven years after Karski’s death, Story of a Secret State is published in the United Kingdom for the first time, and has excited a flurry of advance interest because the producer of The King’s Speech is apparently angling for film rights. Reading it, I wondered if I had seen the unmade film already. Karski’s exploration of the moral fog in which he and his colleagues operated – mistrusting one another on principle and resigning themselves to the slaughter of innocent civilians who would be held theoretically responsible by the Nazis and gunned down in reprisal for attacks by the partisans – made me recall thrillers like Man Hunt and Hangmen Also Die, in which Fritz Lang investigates the blurry allegiances of spies and counterespionage agents, who serve a higher truth by telling lies and imitate the methods of their enemies.
Two episodes resemble scenes tantalisingly directed by Hitchcock. During a muttered rendezvous in a Warsaw church, one of Karski’s collaborators notices that a devout beggar serving as a lookout is improbably clean-shaven: remember the phony nun with high heels in The Lady Vanishes? Even better, the members of a Krakow cell are disturbed during their preparation of cyanide pills, meant to be swallowed in case of capture. Some of the lethal powder is spilled on a table; an unsupervised child wanders into the room and dabbles his fingers in the poison. Life in this case is kinder than Hitchcock’s art: whisked away to be dusted down and scrubbed clean, the boy is spared the fate of the juvenile bomb-carrier blown up on the London bus in Sabotage.
Hannah Arendt accustomed us to think of the Nazis as morbid bureaucrats, desk-murderers who exemplified “the banality of evil”. Karski, who knew what it was like to be tortured by them, conjures up a demon who is gleefully malevolent and anything but banal. His interrogator in the prison is Inspector Pick, an obese and olive-complexioned Slav like an “elegant seal”, whose swelling flesh “curved rather than bulged”. He reeks of pomade, drums impatiently on a table with fingers that taper into manicured nails, and asks questions with a voice that is “resonant and mellifluous”. He does not lay a hand on Karski, but cues an attendant thug to batter his skull with a rubber truncheon. The victim’s stoicism does not impress him: “I don’t have the slightest respect for heroism,” Pick yawns. How will any putative director cast this role, which calls for the bloated body of the chuckling Sydney Greenstreet with the soul of Ralph Fiennes (who played a Nazi commandant in Schindler’s List) somewhere inside it?
At this distance from the events it describes, Karski’s book can only too easily be reduced to an adventure story. The climax is unabashedly cinematic, in the rousing manner of the 1940s. In driving rain Karski clambers on to a British patrol boat at sea off Gibraltar, awed by the Navy’s “display of power and alertness”. Soon afterwards, he sees “the Statue of Liberty emerging from the waters of New York harbour”; reading, we can hear the anthem on the soundtrack. After talking to Roosevelt, he strolls off to commune with the statue of the patriot Kosciusko in Lafayette Square opposite the White House. To undercut heroic solemnity, there is even a laugh line reminding us that Karski is as humanly vulnerable as the rest of us: he asks the Polish treasury for a loan so he can buy dentures to replace the teeth knocked out by the Nazis.
Of course there is more here than political melodrama. Karski’s account of the systematic brutality of the Nazi regime is literally chilling. Told about those flailing bodies corroded by quicklime in the sealed railway carriages, a bourgeois Berliner says: “Very efficient. The Jewish corpses will not be allowed to spread disease as they did in life.” But I can’t help feeling that the book’s resurrection is a symptom of our facile forgetfulness, not a belated appeal to memory and to historical conscience. In 1944, Story of a Secret State was meant to save Poland, which it failed to do. Reread now, it posthumously glorifies a single very valiant Pole: that, however, is not exactly an adequate recompense.