Song of heroism from Auschwitz unites Katy, 29, with 'inspirational' Kazik, 91

ARTICLE FROM LONDON EVENING STANDARD
A London singer struck up an unlikely friendship with a 91-year-old man after writing a song about his escape from Auschwitz in 1942.
Katy Carr, 29, has won a grant from the Arts Council to spread the story of Kazik Piechowski, who was imprisoned at the concentration camp for being a member of the Eagle Scouts in Poland. 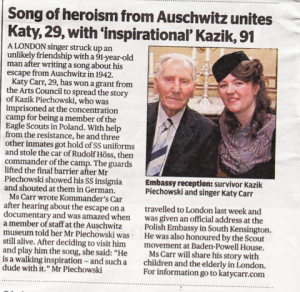 With help from the resistance, he and three other inmates got hold of SS uniforms and stole the car of Rudolf Höss, then commander of the camp. The guards lifted the final barrier after Mr Piechowski showed his SS insignia and shouted at them in German.
Ms Carr wrote Kommander’s Car after hearing about the escape on a documentary and was amazed when a member of staff at the Auschwitz museum told her Mr Piechowski was still alive. After deciding to visit him and play him the song, she said: “He is a walking inspiration – and such a dude with it.”
Mr Piechowski travelled to London last week and was given an official address at the Polish Embassy in South Kensington. He was also honoured by the Scout movement at Baden-Powell House.
Ms Carr will share his story with children and the elderly in London.
For information go to katycarr.comkatycarr.com
http://www.thisislondon.co.uk/standard/article-23938887-song-of-heroism-from-auschwitz-unites-katy-29-with-inspirational-kazik-91.do
Direct link to feature – http://www.standard.co.uk/news/song-of-heroism-from-auschwitz-unites-katy-29-with-inspirational-kazik-91-6389159.html