i had a great time in Cyprus — stayed in the mountains in a village called Arsos [!!] Had lots of Cypriot food, met Andreas Charalambous one of Cyprus’ leading artists, sampled Cypriot village life, drinking local village wine, singing to locals, hearing about the local village heros from previous conflicts, ate great food including manyYaya’s cakes and pastries for instance – one was so good had pumpkin and i think a buckwheat filling DELICIOUS, another was this almond shortbread& fasoli – a bean dish …. i also played to Nicosia’s elite art foundation …. loved this island.. 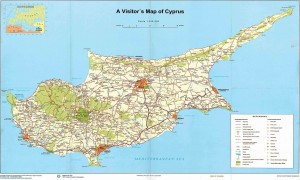 — the beaches in Cyprus were GREAT – no fear of being stung by anything as very little seems to live there in the shallow water – i swam for hours in the shallow water and only saw 1 x starfish and 4 x tiny crabs and seaweed – so no sharks or creratures in fact sea so pure i don’t want to wash off the cypriot sea water from my body but alas I have to — Avdimou Beach – check out the restaurant there Kyrenia Beach Bar, Avdimou Jetty tel : 996794551 , for great sprats and fish and salad, this time of year beach was pretty much deserted so a December delight! Kourian Beach another delight with steep cliffs surrounding it and sunsets to melt into thoroughly recommend – sea water was temperature of a london swimming pool so not cold, only when sun went down,  — will add more picture soon
ARTIST Andreas Charalambous —- PLS READ bit about Andreas Charalambous below — pls note he had a terrible fire in his art studio — i viewed the film of the devastation with regards his loss of over 10000 rare art books and 40 years of art including 1700 paintings….

Andreas Charalambous was born in Nicosia in 1947. He studied fine arts at the Sourikof School of Fine Arts in Moscow, from 1969 to 1975. His supervisors were internationally distinguished artists and scholars, such as Clavdia A. Toutevol (fine arts) and Michael Alpatof, Youri Kolpinski and Nikolai Tretiakof (history of art).
His thesis “Cyprus 1974” has been exhibited in the finest galleries of Moscow, including the Academy of Fine Arts of the Soviet Union and the Manez Gallery, as well as in galleries in St Petersburg  and Kiev. It was also published in several art magazines in the Soviet Union. 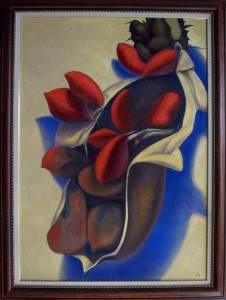 In 1976-77 he has taught art in various high schools in Cyprus. From 1978 until 1980 he worked as an assistant professor at the Sourikof School of Fine Arts, in Moscow.
In 1980 he returned to Cyprus and founded his own Art School in Nicosia, which runs to the present day. A great number of young Cypriot artists took their first steps in painting, there.
In 1982 he participated in an international symposium/workshop in the Former Yugoslav Republic of Macedonia and in 1983 he worked as a visiting lecturer at the Pratt Institute of New York.
In 1993 he participated in an international symposium in Yiellivare in Sweden. A painting of his is exhibited in the local art gallery. In 1999 he participated in a bi-communal workshop which was held under the auspices of Unisco in Visbi, Sweden.
In 2003 he was one of the organizers of the bi-community group exhibition in Nicosia, which took place on the occasion of the visit of the secretary General of the United Nations Mr Kofi Annan, in Cyprus. In 2003 he also participated in the bi-communal symposium that took place in Instanbul. In 2004 he participated in an international symposium of art and literature in Rhodes, Greece.
Periodically he has been the president and secretary general of the Cyprus Chamber of Fine Arts and a member of the administrative board of the Theatrical Organisation of Cyprus and the Advisory Committee of Monuments.
Solo Exhibitions
1970 Kypriaka Chronica, Nicosia
1972  Kypriaka Chronica, Nicosia
1973 Argo Gallery, Nicosia
1975 Platres
1977 Zygos Gallery, Nicosia
1980 Moscow
1981 Polytopo Gallery, Limassol
1984 Rembrandt Gallery, Nicosia
1986 Nicosia Municipality, retrospective exhibition
1987 Larnaka Municipaliy
1988 Apocalypse Gallery, Nicosia
1989 Rogmi Gallery, Limassol
1990 Argo Gallery, Nicosia
1991 Morfi Gallery, Limassol
1992 Artist’s own studio, Nicosia
1994 Artist’s own studio, Nicosia
1997 Famagusta, with Mehmet Ulubatli
1998 Kypriaki Gonia Gallery, Larnaca
2001 Artist’s own studio, Nicosia
2002 Kypriaki Gonia Gallery, Larnaka
2003 Visbi-Gotland, Sweden, with Emin Gizenel
2003 Gloria Gallery, Nicosia, with Emin Gizenel
2004 Artist’s own studio, Nicosia
2004 Listowel, Ireland
2005 Bodrum, Turkey, with Emin Gizenel
2006 Cologne, Germany
2007 Studio 55, Limassol, Cyprus
Group Exhibitions
Andreas Charalambous participated in many group exhibitions in Cyprus and countries abroad, such as Greece, Russia, United Kingdom, France, Germany, Italy, Belgium, Yugoslavia, Bulgaria, Roumania, Poland, Sweden, Kuwait, China and Turkey.
Supplement
On the  26th of June 2006, and whilst Andreas Charalambous was visiting Cologne in Germany for a solo exhibition, a devastating fire entirely destroyed the artist’s workshop situated at Nos 9 & 21 Korais Street in Nicosia, near the Archbishopric. As a result of the fire, many works of art including  paintings, drawings,  photographs, dozens of lecture note sets and theatrical pieces, were destroyed.