Thanks to Ladyfest & Alex Rowse for this feature below from the Southbank Literature Blog re: my recent gig with London Dreamtime 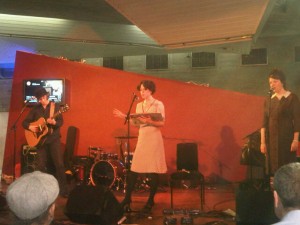 —Posted on November 8, 2010 by Alex Rowse >>>>Visitors to Southbank Centre’s regular Friday Tonic were welcomed last week by the smell of kerosene and a buzz of excitement as performers from Perfect Circle Poi spun arches of fire through the crisp November air in preparation for Girl Fawkes. Ladyfest Ten were taking over and it was a perfect taster for this coming weekend’s festival of music, spoken word, comedy and more. FOR MORE CONTINUE…

That early evening, the Front Room at Queen Elizabeth Hall was filled with the absolutely beautiful sound of You Are Wolf, who layers her voice to create haunting landscapes of poetry and song. Catherine Brogan followed with performance poetry that was laugh out loud funny while bridging the personal and the political. The event was spectacularly ended by my new favourite folky-pop band Lulu and the Lampshades. The girls and boy have gorgeous voices, they use a type-writer as a legitimate instrument and their youtube video I’ve posted above is possibly the best thing I’ve seen in a long time (I account for quite a few of those 480,880+ views). They remind me of early Regina Spektor, The Magnetic Fields and (I’m sorry) a tiny bit of Tegan & Sara’s earlier songs, but have a great sound of their own that simply makes me happy. I won’t gush anymore but please do check them out.

The people who I really want to go on about were London Dreamtime featuring performer and songwriter Katy Carr. The trio opened Girl Fawkes with a story that painted a picture of a ghostly, old-time South London where a young girl is buried alive in a circus act, only to be consumed by the spirits that lay below. There is so much joy to be had in being told a story, and the perfect combination of Vanessa Woolf’s narrative, Nigel of Bermondsey’s music and Katy Carr’s vocals was hypnotic to the point where I was an eager as a child to hear what would happen next. Before the event, I’d had the pleasure of meeting Vanessa and Katy for a quick chat on storytelling and the inspiration behind the ghostly tale they were telling that night.

When the door of the dressing room opened, the first thing that struck me was the beautiful 1940s vintage looks of the two women in front of me. The second thing was their absolute friendliness as they ushered me into the room and settled down in order to discuss their work. Ladyfest is to Vanessa ‘a celebration of women in art’ and is generally known as an arts movement with a very DIY spirit. It’s a kind of feminism through creativity that Ladyfest supports in order to make sure that female artists are given a platform for their work, and Vanessa fits with the values of the festival as she retells stories in order to address the patriarchal stereotypes or cliched gender roles that are often so embedded within fairytales.

‘There are lots of traditional stories out there which I get very frustrated with because they’re good stories but they often hold very old-fashioned view points. They seem to have attitudes on things that not only are they encapsulating but as you tell the story you’re almost passing it on and I really feel strongly that as a storyteller I want to tell stories that reflect the world view that I care about and the things that I think are important. For example I would never tell the story of the Princess and the Pea because you know, how do they find out if she’s a real princess or not? Oh because she’s so delicate (laughs)…I love these stories because they’re fantastic stories, but I want to tell them differently. So quite often I will change the gender of the heroes, or I’ll have two women together or two men together…you want to change those aspects in a story so it’s not just the same old crap.’

Certainly nothing that London Dreamtime performed could be called ‘the same old crap’. The pairing of Vanessa and Nigel of Bermondsey works because of their use of spoken word and song to look at the same subject. ‘We’re inspired by the same sorts of mythology and bits of history of London, and so what will quite often happen is that I will write a story and he will write a song about the same thing.’ Katy Carr was the guest vocalist to Vanessa and Nigel of Bermondsey, or more complexly ‘ambient, sonic, sound additional person’ as Vanessa christened her. Not only did Katy use her voice to aid the spine-tinging atmosphere of Vanessa’s story, but followed that by joining Nigel in performing the song he’d written called ‘In the Garden, where she calls her part: ‘the voices of the Cross Bones Graveyard in Southwark.’

The Cross Bones Graveyard is the inspiration behind Vanessa’s story as well, and a place that the two ladies are incredibly concerned about the fate of. Since medieval times, this piece of unhallowed land has been a place for the burial of ‘single women’, or less politely, prostitutes. Says Vanessa, that prior to Cromwell ‘these prostitutes were actually licensed by the Church yet they weren’t considered good enough to be buried on consecrated ground.’ Her story was inspired by thinking what would be found if you dug down into a place ‘so overcharged with dead’. Katy tells me that a campaign is being run to turn this area of land  into an official memorial garden instead of the carpark that TFL are proposing, so that the souls of the prostitutes who were treated with such hypocrisy by the Church can finally be given some respect. It’s a cause that really deserves some attention and you can find more information on the graveyard and an upcoming fundraiser on the 2nd of December here.

As I said my goodbyes to Vanessa and Katy and went upstairs to take my seat amongst the crowd, a sense of optimism took hold of me and only grew as the event progressed. Girl Fawkes made me feel incredibly positive; positive to find people who boldly campaign for what they believe in and positive that at a great feminist arts event there can be no negativity whatsoever. Ladyfest Ten is taking place from the 12th until the 14th of November in various London venues and you can buy tickets here.