I will be playing at the Greenwich Theatre today 24th July at 3.30pm as part of Metamorphoses

I will be singing at 3.30pm in the teadance reception during the interval of ‘Metamorphoses’ which is a theatre piece telling all of Ovid’s Greek myths, set in the 1940s and full of live music, puppetry and tricks. We are taking it to Edinburgh and are holding some fundraiser performances at Greenwich Theatre, Croom’s Hill, London SE10 8ES tel 020 8858 7755 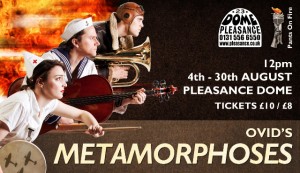 Pants on Fire’s latest actor-musician extravaganza relocates Ovid’s epic stories of miraculous transformation to 1940‘s wartime Britain…
Theseus – a tormented soldier in a lost land; Narcissus – an iconic Hollywood film star; Echo – a gossipy housewife who’s digging for more than just victory; the Chorus – Andrews-like sisters finding close harmony amid cosmic chaos. Heroics, love, gods, monsters and the secrets of the universe revealed through gasmasks, gramophones, live original music and song, puppetry and film. Dynamic, magically moving and darkly comic storytelling. A change is going to come.
‘Metamorphoses’ is likelt to do well at Edinburgh this year with subsequent performances later in the year with acts, dancing and cake stalls and I will be collaborating more with them later on in 2010 20111
www.pantsonfiretheatre.com