I really want to view this film ‘Intruder in the Dust’ the 1949 drama film produced and directed by Clarence Brown and starring David Brian and Claude Jarman, Jr. The film is based on the novel Intruder in the Dust by William Faulkner.
THIS FILM IS UNAVAILABLE ON HOME VIDEO OR DVD so if anyone has a copy please let me know! x x x info at katycarr dot com 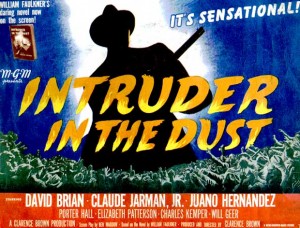