Radio ghost mystery at former RAF station – World War Two radio continues to pick up vintage broadcasts despite not having any power.

World War Two radio continues to pick up vintage broadcasts despite not having any power.
Radio mystery: The Pye wireless below with Marie Paton whose father owned it 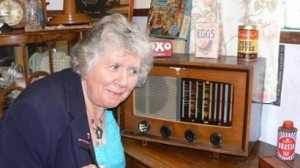 A 70-year-old radio at a Scottish heritage centre has been picking up vintage broadcasts featuring Winston Churchill and the music of Glen Miller.
The Pye valve wireless at Montrose Air Station, a heritage centre that tells the story of the men and women who served there, has no power and is not connected to any source of electricity.
The aerodrome has been a source of paranormal sightings and sounds for almost a century, with reports of ghostly figures, eerie footsteps and door handles turning, but the mysterious wireless broadcasts have had even the most sceptical staff at the station searching for a rational explanation.
The vintage radio set is kept in a recreation of a 940s room. Several people have heard Second World War era broadcasts including the big band sound of the Glenn Miller orchestra and speeches by Winston Churchill. The broadcasts come on at random and can last for up to half an hour.
Technicians who examined it removed the back, but found “nothing but cobwebs and spiders”.
MORE MYSTERIOUS SCOTLAND
* VIDEO: New Lanark ‘ghost’ captured on CCTV
* VIDEO: Dunbartonshire man films ‘UFO’ over the Campsies
Bob Sutherland, a trustee of the air station heritage centre and its treasurer, said: “I have heard it playing Glenn Miller and recognised the song as At Last.
“The volume was very low but the music was quite identifiable.
“Graham Phillip, another volunteer, has heard what he was sure was Winston Churchill and others, including centre curator Dan Paton and his wife, have heard it.
“I was a wireless operator with the RAF and know a bit about them. We have also had our resident radio expert, Ewan Cameron, look at it.
“If we had a powerful transmitter in the area the radio might pick up something, but we don’t.
“It is an old Pye radio which would probably explode if it was switched on.”
Mr Phillip said: “We have all heard the footsteps and seen door handles turn but the wireless is something new and unexplainable.
“It’s not just one of us who’s heard it – most of us here have. We are talking about highly educated, reliable people.
“My wife Aileen was with me when we heard the Glenn Miller Orchestra last weekend. She’s a physicist and not predisposed to believing in things like this but no-one has an explanation.
“If there was a transmitter nearby you’d think it might pick up Radio One or something, but I know what we heard. It went on for half an hour on and off. But the aerial is out anyway.
“We’ve had the back off and the technicians said there was nothing but cobwebs and spiders.”
Volunteer Marie Paton, 67, whose father Jack Stoneman bought the wireless secondhand in 1962, said: “It’s a bit scary. I thought someone was playing a prank on us but I heard it myself last Saturday.
“It plays Glenn Miller, and that’s what everyone has heard. It is very faint and you have to put your ear to it, but that’s what it’s playing. All the experts say it should be impossible.
The wireless broadcasts join a long list of mysteries at the air station, where the heritage centre is in the original headquarters building. Visitors have reported strange “energies” around the airfield, phantom footsteps, doors opening and shutting, the sound of aircraft engines, shadowy figures walking in and out of rooms and even the sighting of a pilot in full flying kit.
The most notorious were the sightings of Lieutenant Desmond Arthur of the Royal Flying Corps who was killed when his biplane crashed.
He is said to have haunted the area until honour was satisfied in 1917, when a government inquiry concluded that he had not been killed by his own foolhardiness but because of poor repairs to his plane.
Peter Davis, 65, the heritage centre’s secretary, added: “It is most odd and we cannot understand it. The station has a very abnormal presence. Several paranormal groups have been in to investigate various things, but the wireless has everyone including our radio technicians stumped.”
The air station was established in 1913 by the Royal Flying Corps as Britain’s first operational military airfield. There are more details about the heritage centre at its website.