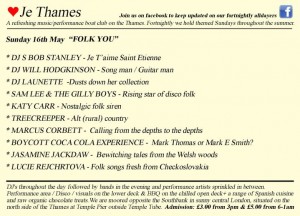 Je Thames Presents “FOLK YOU”
A refreshing music/performance boat club on the Thames.
Fortnightly we hold themed Sundays throughout the summer.
“Quite possibly the best boating experience since Alice in Wonderland”
* DJ BOB STANLEY – Je T’aime Saint Etienne
* DJ WILL HODGKINSON – Song man/Guitar man
* DJ LAUNETTE – Dusts down her collection
* SAM LEE & THE GILLY BOYS – Rising star of disco folk
* KATY CARR- Nostalgic folk siren
*TREECREEPER- Alt (rural) country
*MARCUS CORBETT -Calling from the depths to the depths
*BOYCOTT COCA COLA EXPERIENCE – Mark Thomas or Mark E Smith?
*JASAMINE JACKDAW – Bewitching tales from the Welsh woods
*LUCIE REJCHRTOVA – Folk songs fresh from Czechoslovakia
With a bar on both decks & BBQ on the chilled open deck, we are open from 3pm until 1am.
DJ’s throughout the day followed by bands in the evening, performance artists sprinkled in between.
Performance area / Disco / visuals on the lower deck.
Nibbles include a range of Spanish cuisine and raw organic chocolate treats.
We are moored opposite the Southbank in sunny central London, situated on the north side of the Thames at Temple Pier outside Temple Tube.
Price: £3.00 at 3pm – £5.00 from 6pm