After the witchy, electronic folk of 2003’s Passion Play, Katy Carr has created a concept album inspired by the 1940s wartime divas who entertained the troops. On White Cliffs, for instance she borrows from Vera Lynn’s We’ll Meet Again to create a spectral. alt-folk song about a woman driven to distraction by the loss of her pilot lover. Berliner Ring is a track about Marlene Dietrich and the time she left Berlin to make her footunre in Hollywood, while Kommander’s Car is a gripping, filmic tribute to four Polish men who escaped Auschwitz concentration camp. Drawing on her English- Polish heritage, Carr sings with poise and passion, suffusing the album with warm string arrangements and subtle rhythms. She has often been compared to Kate Bush, and the similarity is present in the beauty and precision of her sound. This is Carr’s most fully formed music yet.
Mojo December 2009 Issue review by Lucy O’ Brien   **** 4/5 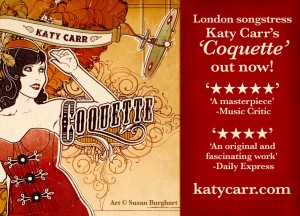