There are only a handful of people left who can say they saw World War II start. Few survive to tell the tale of the German cruiser, Schleswig-Holstein, unleashing a barrage of 280mm and 170mm shells at a Polish fort and shattering the dawn breaking over the Westerplatte peninsula in the free city of Danzig on 1 September 1939.

“I took the telescope and looked out at the channel, first right, then left and then at the cruiser which was moored in the bay,” Ignacy Skowron remembered. “At that moment I saw a flash of red and the first shell hit the gate,” 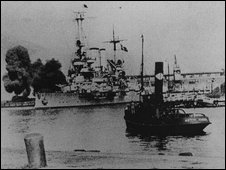 The Schleswig-Holstein unleashed a barrage of shells at a Polish fort
The attack began at 0445. Simultaneously, the German Wehrmacht poured across the frontier of Poland from the west, north and south.
Two days later Britain and France declared war on Germany.
The then 24-year-old Cpl Skowron was one of just 182 Polish soldiers defending the military transit depot on the Westerplatte peninsula.
“I grabbed a machine gun,” said Mr Skowron. “We got the order and we started to fight back. The cruiser then sailed into the channel and started to fire shell after shell at us. I saw huge trees being snapped in two.”
“On the second day there were three attacks before midday. We fought back and then later we heard some noise and there were planes overhead.
“They started to dive-bomb us and guardhouse number five was completely destroyed. Five soldiers were killed.” 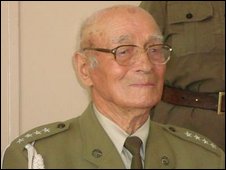 Cold, hungry, dirty
After the dust lifted, the Germans were amazed to see anyone still alive. The fighting lasted for seven days.
“The Germans saw that their attacks weren’t working so they used flame-throwers to try and overcome us with flames. By the sixth day we were barely managing to survive because we were cold, hungry, dirty, and we hadn’t slept. We were struggling,” Mr Skowron said.
At the end the German commander, Gen Friedrich Eberhardt, allowed the Polish commander, Maj Sucharski, to keep his ceremonial sabre.
“The German told him that if he had such an army he could fight the whole world,” recalled Mr Skowron.
Out of perhaps 3,400 German troops, between 200 and 400 were killed in the battle. Of the Poles, between 15 and 20 were killed.
Mr Skowron, now 94-years-old, was marking the start of the war at a small concrete community centre in the outskirts of his home town of Kielce, in southern Poland.
Westerplatte is particularly important here because many soldiers from the town’s Fourth Infantry regiment fought in the battle.
During the ceremony veterans, serving soldiers and residents ate cake and fruit while a choir sang war standards.
A group of young people dressed in period uniforms marched in with the Polish standard. People take the war seriously here.
Painful memories
World War II caused enormous destruction and suffering in Poland. Close to six million Polish citizens – half of them Jews – were killed and its cities were left in ruins.
In proportion to its size, Poland suffered more damage and casualties than any other country.
The war still causes painful memories but it also provokes great pride, the historian professor Pawel Machcewicz – an advisor to the Polish prime minister – told me.
“Westerplatte is the most important, the most recognisable symbol of Polish heroism and Polish resistance,” he said.
“This was an isolated post with 200 Polish soldiers. Their duty was to resist for 12 hours and they resisted for seven days against an overwhelming German army.”
Mr Skowron hopes to attend the ceremonies marking the 70th anniversary of the start of the war in Westerplatte.
He was awarded the Order Virtuti Militari, Poland’s highest military decoration for his services. I asked him if he thought of himself as a hero.
“You have to help people,” he replied. “When my friends were fighting I had to fight too. I have sad memories. We didn’t think we would get out of there alive. We were like a bird in a cage.”