A commemorative service is to be held at London’s St Paul’s Cathedral to mark the 70th anniversary of the evacuation of British citizens in World War II. The first wave, known as Operation Pied Piper, involved 1.5m people and took place over four days from 1 September 1939, the day the war started.

Some 3.5 million people, mainly children, were removed from cities and towns to safer areas from 1939 to 1945.
The Evacuees Reunion Association has organised the St Paul’s event.
It is due to start at 1100 BST and four evacuees are due to share their experiences.
Some 2,000 people are expected to attend and the service at the London landmark will be followed by a flypast by an RAF Lancaster bomber. 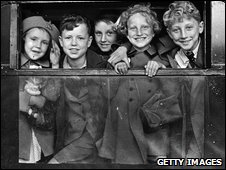 ‘Social upheaval’
The Evacuees Reunion Association is the largest organisation serving World War II British evacuees.
The charity aims to educate people about the evacuation, and provide support and counselling for former evacuees.

Gordon Abbott, one of the trustees, said:

“There are many thousands of people who have no knowledge of the civilian evacuation. It was the biggest social upheaval this country has ever seen.”
The 76-year-old said in addition to the “forgotten children”, the service would also remember the parents left behind and the foster parents who cared for the evacuees.
Of the 1.5m citizens evacuated as part of Pied Piper, some 750,000 were children on their own.
A year later, just before the Blitz, an estimated 600,000 children were removed from the areas deemed to be most at risk from enemy bombing.
Mr Abbott was seven when he was evacuated from Battersea in London to Bude in Cornwall in June 1940.
Train journey
Carrying his gas mask, a change of clothes and some food, he and his classmates were marched to a station and put on a train along with their teachers.
He had no idea where they were going and when he arrived in Bude, he was “selected” by his new foster parents.
“Obviously some of the children were upset and crying. I wasn’t stressed. I thought it was going to be a great adventure and it turned out to be one of the greatest adventures of my life,” he said.
He was loved and cared for by his “auntie and uncle” and after five years of country living, he found he could not return to London.
For many others, it was a life-enhancing, mind-broadening experience, which forged new families and friendships.
However, a minority were beaten, mistreated and abused by the families they were billeted to.