September has been a wonderful month of concerts and performances giving Katy Carr and the Aviators opportunities to meet people from all around the planet! Highlight events are listed below but I also wish to thank Czworka Polish Radio 4 for a lovely interview – listen to interview here 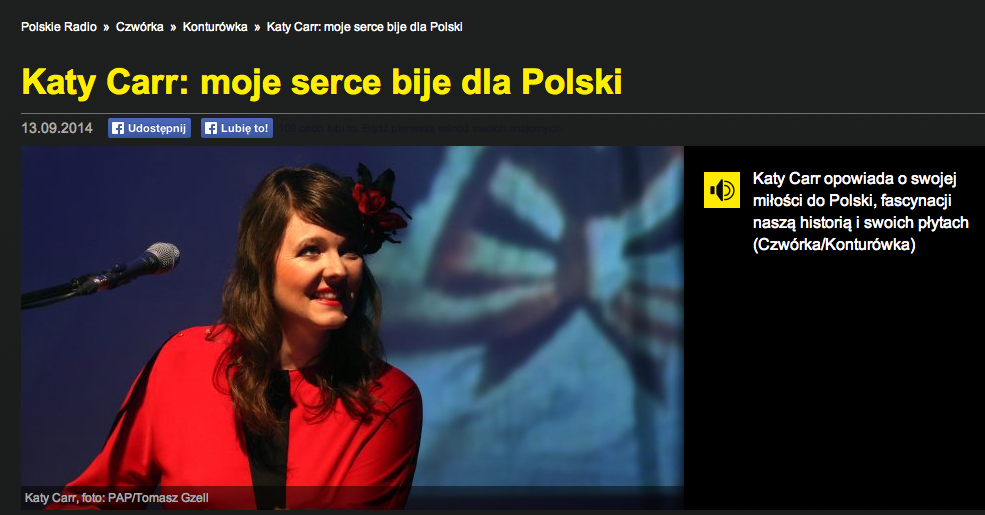 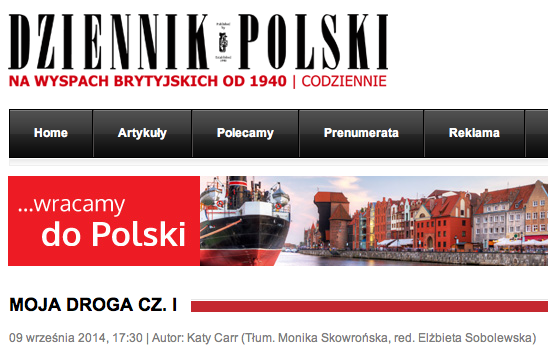 Highlight events this September included The IV Congres of Polish Communities in Exile – IV Kongres Polskich Towarzystw Naukowych na Obczyźnie in cooperation with PAU – Polska Akademia Umiejętności where we performed to those Polish people who had been kidnapped from Poland during and after WWII, for slave labour in Stalin’s Soviet Union including Siberia and various other destinations. It was very moving to hear the horrors of what the Polish veterans had experienced and especially because 2014 marks the 75th Anniversary of the beginning of the WWII where both Germany [1/09/1939] and the Soviet Union[17/09/1939] not only brutally attacked Poland but divided Poland into a German and Soviet zone as per the Molotov–Ribbentrop Pact. 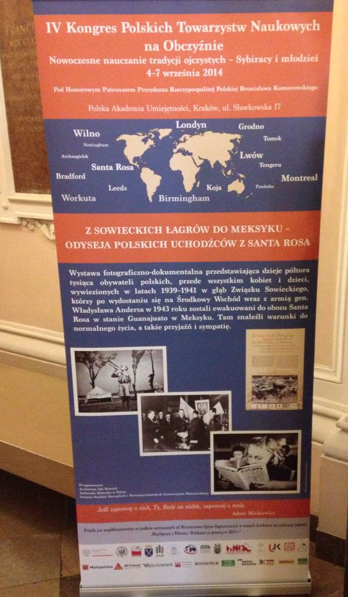 Not many people in the West know of the Soviet Invasion of Poland on 17th Sept 1939 as it has not been widely documented in our history books but this was an integral theme of this conference and explained the suffering that many of the survivors had witnessed and experienced throughout Stalin’s Slave Trade of WWII and beyond. It was also moving to meet the younger generations of the survivors and now I have made new friends not only in Poland but in Mexico, North America, Canada, Argentina, Brazil, South Africa, New Zealand, Australia, Kazakhstan, Great Britain, India, Norway, Finland, Sweden, Germany, France and I hope to travel across Polonia in 2015 to meet you all again ! – Link to event here 🙂 http://www.kptnno.krakow.pl/images/koncert_Katy_Carr.pdf 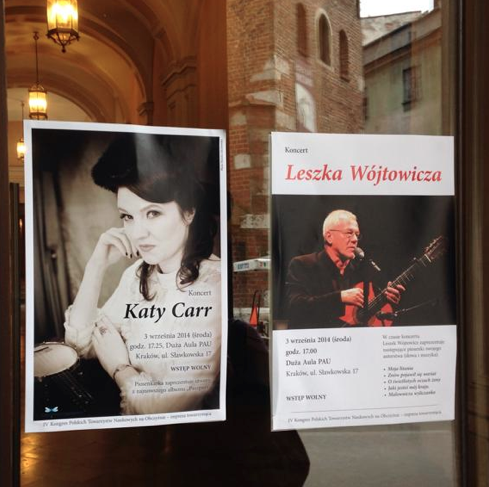 I also had the great honour to support Leszek Wojtowicz who is a renowned Polish poet and songwriter and I love his songs – more info here www.wojtowicz.net.pl

I was also very excited to give a talk at the IV Kongres Polskich Towarzystw Naukowych na Obczyźnie Akademia Umiejętności Kraków at 1130am at the Duza Aula on ul Slawkowska 17, on the outreach work we have done with British school children throughout our Heart Poland – Building Bridges schools project in Enfield view video here  https://www.youtube.com/watch?v=KrFWtYbllhs

Katy Carr and the Aviators were also very excited to play at Enfield Town Festival with Paul Tkachenko on 14th Sept and at the Fundacja Pomocy Wzajemnej Barka ‘s 25th Anniversary in Poznan, Poland. The concert took place at 8pm at the Poznańska Ogólnokształcąca Szkoła Muzyczna I st. nr 1, im. Henryka Wieniawskiego ul. Solna 12, 61-736 Poznań. A big thanks to Bradford Literature Festival at The Theatre in the Mill in cooperation with the University of Bradford and Arts Council England on 27th Sept address more on the event here – http://www.bradford.ac.uk/theatre/whats-on/lyrical-mehfil/ It was fascinating to play Polish WWII inspired songs to a multicultural audience. I have been invited back to Bradford to learn to sing in Urdu in return members of the Asian community will sing in Polish- how exciting the cooperation will be!

Below I am with my new friends Mehjabeen Ghazal Ansari who is a notable Urdu poet, widely published in her mother tongue and recites her poetry in traditional melodious tarannum style. She is founder of the Yorkshire Adabee Forum, which promotes literature in the Urdu language and Poet Samia Naz – A big thanks to the organisers of this year’s festival and i hope to return to see you all again soon ! 🙂 )))

I also wanted to say a MASSIVE thank you to Basia Zarzycka for creating a lovely hat for me to wear in Warsaw, Poland – See pictures below on 25th Sept 2014 at the Exhibition ‘Londyn – Stolica Polski. Emigracja polska 1940-1990’ at the  Biblioteka Uniwersytecka w Warszawie hosted by Muzeum Historii Polski – below is an article from the event written by Sabina Treffler 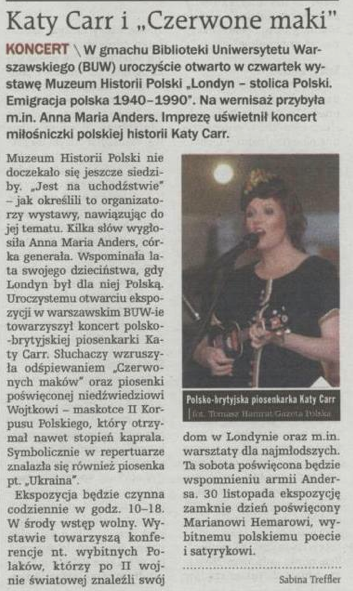 Article from the event in the Gazeta Polska below 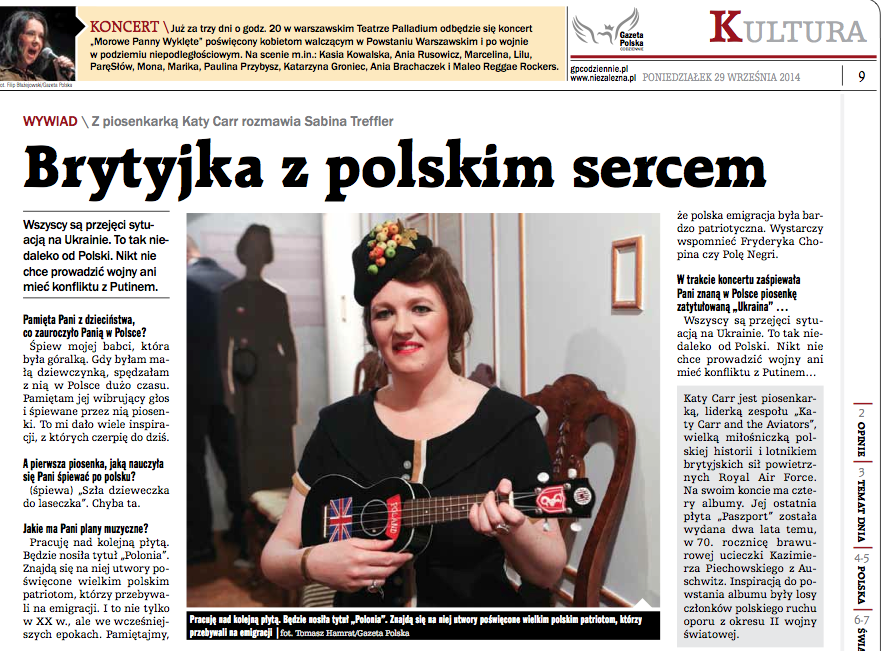 Here I am talking with Anna Maria Anders, General Ander’s daughter after my performance about the Polish people who had to remain in exile after WW11 due to Poland falling behind the Iron curtain 1945- 1989. We are discussing my song Wojtek about teh mascot of the 22nd Artillery Supply company of the Polish II Corps who raised the morale of the soldiers in WWII. 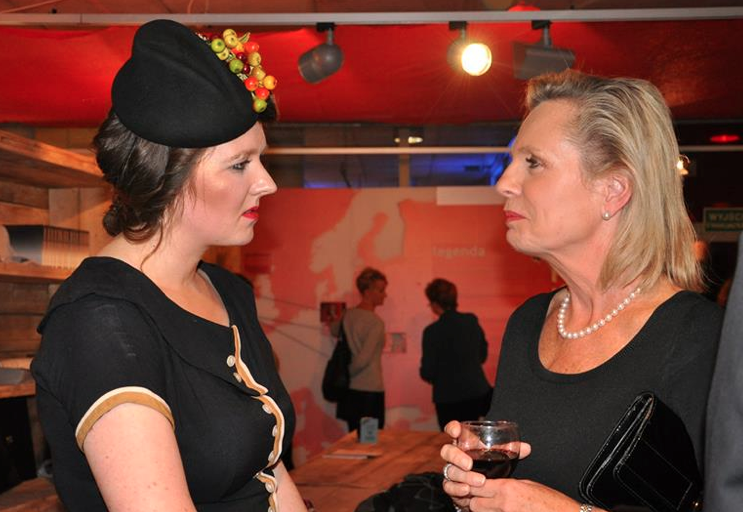 Up and coming Katy Carr and the Aviator’s Performances include…. SEE YOU THERE !!! X 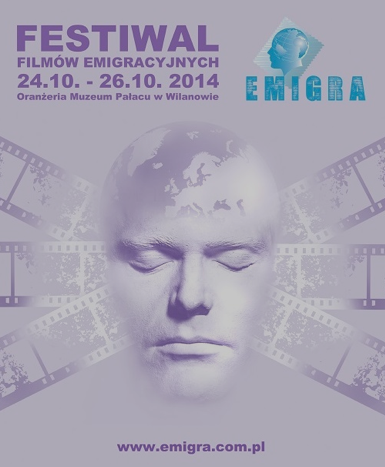