‘Last, but far from least, is Katy Carr. She’s been releasing albums since 2001, but has really found her soul withPaszport, her love letter to Poland (her mother’s native land) and its people, especially in World War II.Kommander’s Car, which she released on her 2009 album Coquette, seemed to bring a seismic shift in her writing, and this covers her own excellent compositions (Mala, Little Flower is just one of the standouts) as well as some traditional Polish material. The arrangements drip with passion and manage to conjure a longing that’s ineffably Polish, with a deep ache at the core of the violin and cello, as well as in Carr’s own keyboards. It’s a gorgeously detailed disc (Carr even recorded the flying Spitfires for Motylek), and she wears her heart firmly on her sleeve. There are shades of Kate Bush, most notably on Red Red Rose, but this is the work of a talent who’s found her voice and maturity. For her and her band, the Aviators, “Celtic Connections is very important. We’re performing the whole album and we hope to play for the Scots and Polish communities there – many who found they couldn’t go back after the war settled in Scotland. And Wojtek, the Polish Army bear, landed in Glasgow and was walked through the streets before he went to live in Edinburgh zoo. So covering that ground is going to be exciting for me, too. I might even find one of his hairs!”’ 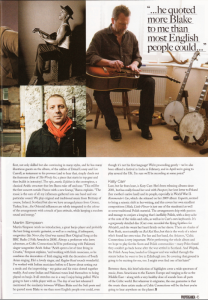