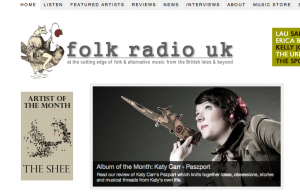 by SIMON HOLLAND on 17 APRIL, 2013
in ALBUM OF THE MONTH, FEATURED ARTISTS, MUSIC REVIEWS
Katy Carr has been added to Yoko Ono’s meltdown and is also lined up for Womad, two prestigious gigs amongst a number of key festivals and other dates this summer. It marks the end of a busy six months since the release of the acclaimed Paszport, a complex, moving and hugely enjoyable  work that captures some of the essence of Katy’s Polish heritage, while asking bold questions about national identity and repression.
Paszport is actually Katy’s fourth album release, but this unique CD is the one that captured the imagination and has marked her out as an artist of distinction, winning critical acclaim across the board and comparisons to Kate Bush and Björk. In truth such comparisons don’t offer much insight into Paszport, but as two wilful female singers, who sound like no-one else, with singular and highly developed artistic vision there is at least one point of reference. In many waysPaszport knits together ideas, obsessions, stories and musical threads from Katy’s own life, as she draws on the experiences of her elders and the history we all of us share.
Katy Carr grew up in Nottingham born to a Polish mother and British father. She had an early interest in music, which led to winning several singing competitions in her junior years. Unusually, she also developed an obsession with flying. As Katy has said herself, “Instead of pop stars I had Amelia Earhart on my bedroom wall.” She actually holds a pilots license having spent her teenage years learning to fly with the Air Training Corps.
With Earhart as a heroine, it’s perhaps natural that Carr developed an interest in history and this was further fuelled by her grandmother on her British father’s side, which ironically led to Katy exploring her Polish heritage. It found expression in the CD that preceded this one, Coquette. As she has explained, “My grandfather died and my grandmother was grieving. She wouldn’t talk to anyone. My father and auntie didn’t quite know how to break the barrier of the silence and one day I was sitting there and I asked her, ‘Grandma, will you tell me about your youth? What was it like in the 30s and 40s?’ And as soon as I asked her that, her eyes lit up and she talked about her youth and wouldn’t stop for three days! She regaled me with tales of dancehalls and airmen. I fell in love with old-school glamour, with torch singers, especially Edith Piaf.”

This passion clearly shows in her distinctive look, based on vintage and heritage fashion. It also found expression in a set of songs about the WWII experience of England, France and Poland. The song Kommander’s Car was originally recorded for Coquette, but its story of a desperate escape from Aushwitz by some daring and resourceful Poles, would prove a springboard for a more thorough immersion into that country’s history
By the time of the release of Coquette, Katy had become immersed into the UK’s alternative music and folk scene, even curating a successful club night in Shoreditch known as the Crow Club. Sam lee had his first gig there and was inspired to set up The Nest Collective as a result of the scene that Katy had developed.
Kommander’s Car is re- mastered for inclusion on Paszport and is presaged by a short clip from a conversation between Katy and Kazik Piechowski, the surviving escapee. That conversation is conducted, naturally enough in Polish and an English translation is provided in the CD booklet and the whole booklet is presented as such. The song deals with the final moments of the escape and the contrasting emotions of fear and elation. Katy’s countdown of the distance is especially poignant, but the combination of strings and percussion winds tightly around her voice, a repeated piano figure adds to the urgency.

Much of the album deals with Polish people fighting for their liberty and identity. Whether it be as soldiers or partisans, these are people fighting for their loved ones and feeling the pain of separation. The tragedy of the perils of the conflict and the imminent possibility that this estrangement may be made permanent by the death of one or the other is never far from the surface of Weronika, Mala, Little Flower, or even the anthemic rallying call of Let’s Go, Partisans!
It should never be forgotten that Poland suffered both at the hands of the Germans and Russians at the start of the war. With the eventual allied victory, there was still no redemption as the country was further dominated behind the Iron Curtain subsumed by the Soviet Block. For many who had escaped the Nazi tyranny to join up with free Polish fighters across Europe, taking the fight back to their oppressors, there would never be the chance for repatriation and the possibility of a heroes return.
Indeed, much of the hardship that the country had been through was suppressed under the communist regime. Even Piechowski would suffer further as former member of the Polish Home Army, spending seven years in prison during the communist dictatorship. Katy makes the point to telling effect in the daunting Red Red Rose.
Throughout all of this, this is still a vibrant celebration of the Polish people and their resilience. The incorporation of Klezmer and Gypsy elements into the music keeps things moving along nicely and the playing and production are really out of the top draw. Although much of the subject matter is historical, the sound is still very current, borrowing from the traditions in much the same way as many of the artists Katy promoted at The Crow Club have done.
Katy’s singing is strong and she brings the elements together with real skill. Even the multilingual approach adds something extra giving a real sense of connection, borne out by the translations.
This isn’t just history, this isn’t just war, this isn’t even just about a nationality, but about humanity. There are individuals with hopes, fears, triumphs, failures, joys and sorrows, but it is where our common aspirations join though shared responsibility, courage, duty, sacrifice and love that nations are forged. We’d do well to remember that is something all of us share.
Katy and the appropriately named Aviators will be playing the Lexington next Monday 22nd April and has a number of high profile international festivals coming up over the summer. Pack your Paszport and let Katy fly you to a world of musical magic.
Direct link to article : http://www.folkradio.co.uk/2013/04/katy-carr-paszport-album-of-the-month/?utm_source=feedburner&utm_medium=feed&utm_campaign=Feed%3A+FolkRadioUk+(Folk+Radio+UK)
Tags: Paszport
Share: