Polish culture had a big effect on me as a young child,” explains Katy Carr, the 32-year-old tipped for big things in 2013. “Although I was born in Nottingham, I spent the first five years of my life in Włocławek – where my English father, an electrical engineer, met my Polish mother. I attended the local kindergarten and constantly spoke Polish.”
Katy’s deep love for Poland becomes apparent as she reminisces. “I have very fond memories of being with my family in the mountains, collecting mushrooms from the forests and holding my Polish grandmother Joanna’s hand as she sang me her favourite Górale – Polish highland songs. She was a Goralka, and they are renowned for their love of music and singing.” 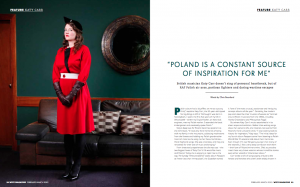 From these early experiences the die was cast – the two biggest loves of Katy Carr’s life would be music and Poland. Today she is enjoying a rapid rise to the top; The Sunday Times praised her latest album Paszport as “never less than immaculate”, the Guardian named
it “one of the most unusual, passionate and intriguing concept albums of the year”. Certainly, few modern pop stars describe their musical influences as “centred around Polish musicians from the 1930s, including Hanka Ordonówna and Mieczysław Fogg”.
But where Katy Carr’s music astonished is in its sheer scope and ambition. Rather than writing songs about her personal life, she inteprets real events from Poland’s more turbulent times. “I love looking back to history for inspiration,” Katy says. “The initial ideas for my fourth album Paszport came from listening to Polish World War II veterans talk about their memories. Even though I’m over 60 years younger than many of the veterans, I felt a very deep connection with them – their love of Poland mirrors mine. I felt so proud to meet these very brave veterans whose incredible stories were either untold or little known about.”
Carr wrote a raft of songs paying tribute to the heroes and heroines who aren’t even widely known intheir homeland, yet alone in Britain. It was a revelation: some of the stories Carr was inspired to document in song take your breath away. “The person I dedicate my album to is Kazimierz ‘Kazik’ Piechowski, who was born in 1919,” she says. “On 20 June 1940 he was imprisoned in Auschwitz for being a Polish Boy Scout. On 20 June 1942 Kazik, along with three other political prisoners, dressed in SS uniforms and drove out of Auschwitz in camp commandant Rudolf Höss’s car.”
Carr was fascinated by Piechowski’s story. “When I learnt of Kazik’s remarkable escape I didn’t know he was still alive, but I was so gripped by the drama of the escape that I wrote a song called Kommander’s Car.” Subsequently she decided to seek him out, tracing him to Gdansk. A subsequent short film about their meeting was released on the 70th anniversary of his daring escapade.
“I sign my CDs Niech zyje Polska Niepodlegla – long live an Independent Poland!”
But despite a deep appreciation of Polish history, Katy Carr is also fascinated with the country in the 21st Century. “Modern-day Poland is a very exciting place and a constant source of inspiration for me –
and I have nothing less than complete admiration for Polish people who have adapted ingeniously to the huge changes of the past two decades. I’m so proud to be connected with the Polish community here in Great Britain. I love to sign my CDs with Niech zyje Polska Niepodlegla – Long live
an Independent Poland!” 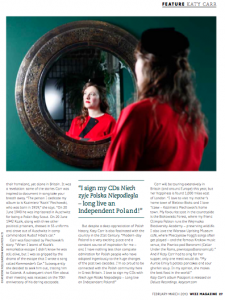 Carr will be touring extensively in Britain (and around Europe) this year, but her happiness is found 1,000 miles east of London. “I love to visit my mother’s home town of Bielsko-Biała and I love Tczew – Kazimierz Piechowski’s home town. My favourite spot in the countryside is the Białowiez ̇a Forest, where my friend Olimpia Pabian runs the Wejmutka Biodiversity Academy – preserving wildlife. I also love the Warsaw Uprising Museum café, where Mieczysław Fogg’s songs often get played – and the famous Krakow music venue, the Piwnica pod Baranami (Cellar Under the Rams, piwnicapodbaranami.pl).” And if Katy Carr had to sing for her supper, only one meal would do. “My Auntie Emily’s potato pancakes and sour gherkin soup. In my opinion, she makes the best food in the world!” Katy Carr’s album Paszport is released on Deluce Recordings.