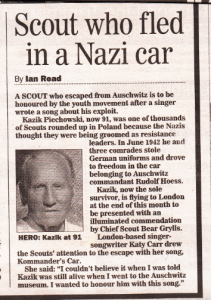 A SONG about a dramatic escape from Auschwitz concentration could earn composer Katy Carr a top music award.
The singer song writer is up against stars like the Arctic Monkeys ,Damon
Albarn,Kate Bush and P.J Harvey after being nominated for the London Music
Awards due to be presented later this year.
Her inspiration is Kazik Piechowski who with three other men drove out of the
notorious concentration camp to freedom in the Commandant’s staff car.
It will be the 70th anniversary of Kazik’s desperate drive in June and after writing the
song she met the resistance hero who she now calls her adopted Polish grandfather.
She has released a DVD featuring the song and interviews with Kazik who is a
sprightly 93 year old.
Last year the former Eagle Scout came to London to receive a top award from Chief
scout Bear Grylls.
After they invaded in 1939 the Nazis rounded up potential leaders like teachers and
intellectuals.
They also imprisoned Eagle Scouts who they believed would lead any uprising.
By 1942 Kazik was in a desperate state and when a fellow inmate said he could get
hold of the car he jumped at the chance.
Two other inmates joined the escape plot and they stole SS uniforms and guns.If they
failed they were going to shoot themselves.
Katy’s song describes the moments when they approached the final barrier to
freedom.
She said:”When the car was stopped Kazik had to do something.He had to be an SS
officer.He got out of the car and cursed the guard at the barrier in German.the barrier
was lifted and they got away.”
Film maker Hannah Lovell shot the documentary Kazik and the Kommanders car
which was released last week.
Hannah said:”I was completely gripped by the story of Kazik’s triumph against the
odds and to ask him about those crucial moments.
“The experience opened my eyes to events in Poland during World War Two.It was
a moving and really humbling experience to be present when Kazik told us the very
vivid account of his escape moment by moment and how moved he was by the song.”
After fighting with the Polish Underground forces Kazik was thrown in jail for 10
years by the communists.
It was only when the Soviet bloc collapsed that Kazik’s tale could be told.