Dir. Hannah Lovell / 2009 / Great Britain / 25 min
A documentary with animation from Galen Wainwright about a Polish scout, Kazimierz Piechowski, who was imprisoned in Auschwitz concentration camp and then made a daring escape. Kazik is one of the few people still living who can bear witness to the experience of Auschwitz. Through songwriter Katy Carr visiting his home and talking with Kazik, we find out about how he was imprisoned in Auschwitz in 1940 for being a Polish scout and resisting Nazi occupation. We hear about his experiences in Auschwitz and the audacity of his master plan, and how he managed this unbelievable escape, when so few had ever escaped – out of millions, 802 tried, only 144 people made it.
Most of all, through Kazik’s strong and moving response to Katy’s song which narrates the last 80 meters of his escape, we have a direct window into his experience, when everything depends upon five seconds of action… 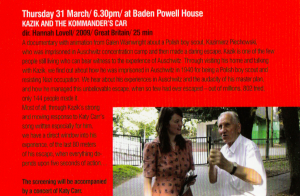 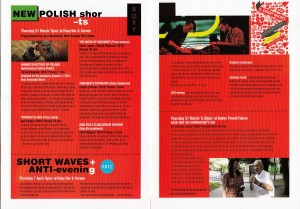 Kazimierz ‘Kazik’ Piechowski, now 91, who will be attendingone of the few Auschwitz prisoners to escape,
is visiting Britain for the first time, to share his story through an evening of  film and music.
Kazimierz Piechowski was transported to Auschwitz on the 20th June 1940 for being a
Polish scout, then considered part of the Polish Intelligentsia. Exactly two years later, at
midday on Saturday June 20th 1942, Kazik escaped from the Nazi concentration camp.
He masterminded his way out with three other political prisoners, disguised in SS
uniforms, and by appropriating a Steyr 220 car belonging to Rudolf Höss, the then
Commandant of the death camp. Kazik is the only one now left from the four friends
who made the escape, who can tell us first hand what happened.
Upon discovering Kazik’s story, songwriter Katy Carr wrote a tribute song,
‘Kommander’s Car,’ from the point of view of Kazik, narrating the last do-or-die 80
metres of his break for freedom. Katy felt compelled to share this song with Kazik, and
her meeting with Kazik in Poland has been captured in a short documentary, Kazik and
the Kommander’s Car, directed by Hannah Lovell.
Kazik’s life is an inspiring and enduring story of our age. It needs to never be
forgotten. We are very honoured to have Kazik attending this event, and talking to us
in person.