Visit the larger than life statue of General Władysław Sikorski and download the Musicity app for a free download of Katy’s song – Sikorski. The statue was unveiled in 2000 and is opposite the Embassy of Poland, 47 Portland Pl, London W1B 1JH
info :
Katy Carr on Musicity : London based folk performer, Katy Carr, re-connects with her own own Eastern European roots and interest in the heroic struggles of World War 2.
Her tribute song to General Władysław Sikorski [1881 – 1943] Prime Minister of the Polish Government and Commander-in-Chief of the Polish Armed Forces 7th November 1939 – 4th July 1943, was inspired by the statue of General Sikorski, Portland Place London W1 and the Embassy of the Republic of Poland.
The song features English and Polish lyrics, and a captivating melody that will have you singing it all tha way back down to Oxford Circus tube.
Composed for Musicity by Katy Carr Produced by Katy Carr and Nigel Wolf Hoyle 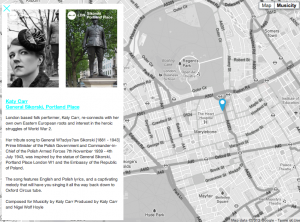 Musicity is a location-based, curated music platform that explores the intersection of music, place, memory and experience.
We commission recording artists to compose original music in response to an aspect of the city that inspires them. Through our mobile app, you can visit these locations to hear and download these exclusive tracks.
We hope our programme inspires people to see the urban fabric in new ways and encourages them to explore the city musically, architecturally and experientially.