Katy Carr review in the Sunday Times of 'Passion Play'

By Mark Edwards – Published: 23 February 2003 : ‘Definitely one for the Mercury Prize jury to consider. ‘
WHEN Katy Carr’s debut album, Screwing Lies, came out, one critic described her as an “alt-folk star in waiting”. Given the extra polish and poppiness of Passion Play, she can probably stop waiting now. Her music has echoes of Kathryn Williams, Björk and PJ Harvey: folky origins, a voice that appears to be able to do anything it wants and some don’t-go-there nastiness lurking in the lyrics. “Let me bite your neck, my love, and draw blood,” she sings on Snake Kiss; and the bloody imagery continues on Reddle Woman, which – if I know my Thomas Hardy – refers to the red-dye seller whose ruddy appearance frightened the children. A bit dark for you? Then sit back and enjoy John Hegley’s guest appearance on Turpin. Definitely one for the Mercury Prize jury to consider. 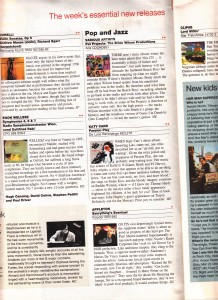