Katy Carr Feature in The Times : A great escape

Feature on Katy Carr by Laura Silverman : Published at 12:01AM, April 2 2011
Link to online article : http://www.thetimes.co.uk/tto/arts/music/classical/article2969854.ece
Katy Carr, an English former RAF pilot, has written a song about the little-known episode of a Polish prisoner fleeing Auschwitz in a stolen car.
At noon on June 20, 1942, a Polish prisoner stole an SS commandant’s car and fled Auschwitz with three others. Kazimierz Piechowski, then 22, was dressed as an officer. Yet hardly anyone outside Poland has known this until now. Katy Carr, an English former RAF pilot, who heard the story on television in Poland two years ago, has written a song about it. This month, after finding and meeting Piechowski in Gdansk, she is bringing him to Britain, where he will hear the rousing Kommander’s Car performed. “To discover that he was alive was a major shock,” said Carr, who is half-Polish. “He’s like the grandfather I never knew.” 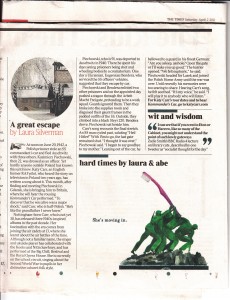 Nottingham-born Carr, who is not yet 30, has released three 1940s-inspired albums in the past decade. Her fascination with the era comes from joining the air cadets at 13, where she learnt about the air battles of the time. Although not a familiar name, the singer and ukulele player has collaborated with the Kooks and Nitin Sawhney, and has performed at the Big Chill, Bestival and the Royal Opera House. She is currently on the school circuit, singing about the Second World War to pupils in her distinctive cabaret-folk style.
Piechowski, who is 91, was deported to Auschwitz in 1940. There he spent his days seeing prisoners being shot and wheeling bodies to a crematorium. One day a Ukrainian, Eugeniusz Bendera, who serviced the SS officers’ vehicles, suggested that they escape by car.
Piechowski and Bendera enlisted two other prisoners and on the appointed day pushed a wagon through the Arbeit Macht Frei gate, pretending to be a work squad. Guards ignored them. Then they broke into the supplies room and disguised their gaunt frames in the padded outfits of the SS. Outside, they climbed into a black Steyr 220. Bendera drove, Piechowski sat beside him.
Carr’s song recounts the final stretch. An SS man cycled past, saluting “Heil Hitler!” With 15m to go, the last gate remained shut. “I thought it was over,” Piechowski said. “I began to say goodbye to my mother.” Leaning out of the car, he bellowed to a guard in his finest German: “Are you asleep, asshole? Open the gate or I’ll wake you up good.” The barrier opened. “We felt euphoric,” he said. Piechowski headed for Lasek and joined the Polish Home Army until the war was over. Until recently his memories were too searing to share. Hearing Carr’s song, he felt soothed. “It’s my voice,” he said. “I will play it to anybody who will listen.”
For Katy Carr’s tour dates and to hear Kommander’s Car, go to katycarr.com