P 29 Culture in brief : Katy Carr, a GV artist and an extraordinary look at the world of ballroom
At ﬁrst sight, they make for unlikely friends – a young female singer-songwriter from Marylebone anda 91-year-old from Poland who hasexperienced enough to ﬁll several lifetimes. But when Katy Carr met Kazimierz ‘Kazik’ Piechowski, who in June 1942 became one of only a handful of people to escape from Auschwitz, a remarkable friendship and artistic collaboration was born. 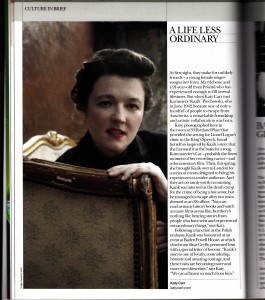 Katy, photographed here in the room at 33 Portland Place thatprovided the setting for Lionel Logue’s clinic in the King’s Speech, found herself so inspired by Kazik’s story thatshe has used it as the basis for a song,Kommander’s Car – probably the ﬁnest moment of her recording career – and a documentary ﬁlm. Then, this spring,she brought Kazik over to London for a series of events designed to bring hisexperiences to a wider audience. And they are certainly worth recounting. Kazik was interned at the death camp for the crime of being a boy scout, but he managed to escape after two years,dressed as an SS ofﬁcer. “You can read as many history books and watchas many ﬁlms as you like, but there’s nothing like hearing stories from people who have seen and experienced extraordinary things,” says Katy.
Following a function at the Polish Embassy, Kazik was honoured at anevent at Baden Powell House, at which chief scout Bear Grylls, presented him with a special letter of honour.
“Kazik’s story is one of loyalty, comradeship,honesty and amazing courage, and these traits are becoming more and more rare these days,” says Katy.“We can all learn so much from him.”