This is so very good it could actually give the terms ‘singer songwriter’ and ‘con- cept album’ good names. Now there’s a notion! London-based Katy Carr came from the East Midlands but her grandmother’s generation in the 1930s and ’40s were from Poland. Already known for a fascination with all things 1940s and flighty (she’s a qualified pilot and her band are called The Aviators), this one’s entirely inspired by tales she’s collected from Polish WW2 veterans, resistance fighters, survivors of detention camps, theWarsaw uprising and more.
port 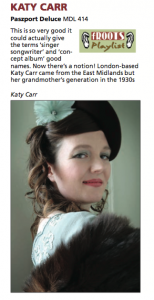 But not only are these songs with real stories and strong images, they’ve also got great tunes and inspiring arrangements – her own piano and uke plus cello, violin, bass, tuba, trombone, and percussion from Guy Schalom – echoing sounds from both Polish traditional music and the era. And she’s such a fabulous singer with a clear, expressive but unaffected voice.
Mostly in English, a little in Polish, the beautifully detailed booklet comes with translations and backgrounds to all the songs and lots of credits: it’s tempting to para- phrase it all in a blow-by-blow account of the album but sometimes, frankly, it’s better to shut up and let the artefact to the talking.
There’s so much work, love and singular talent gone into this on nearly every level – “The BM597 Spitfire which features on Motylek was recorded by Katy Carr at Good- wood Festival of Speed…” – that it feels churlish to mention that what’s visible on the outside of the bog-standard plastic jewel box with entry-level typesetting on the back gives no clue as to how good everything else is inside: I nearly overlooked it here. Cries out for classier packaging values. Don’t let that put you off: this is major.
www.katycarr.com
Ian Anderson
FROOTS Paszport