4/5 star review of 'Paszport' by Guardian

Katy Carr has a mission: to publicise stories of the Polish forces during the second world war. In doing so she has created one of the most unusual, passionate and intriguing concept albums of the year. Born in Nottingham to a Polish mother and Anglo-Scottish father, she became fascinated by the era after meeting Kazik Piechowski, who escaped from Auschwitz in 1942. The album opens with her talking to him about his escape, and with the exuberant and edgy Kommander’s Car. There are other stories about partisans, a bear who became a Polish forces mascot, and there’s a powerful lament for those sent by the Soviets to camps in Siberia. Carr’s emotional songs are backed by bravely original arrangements featuring her own piano and ukulele work, plus strings and brass, and deserve to be heard far beyond the Polish community. 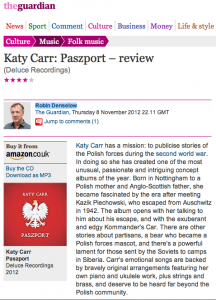