Hybridlab Lost in Paradise – What Katy Did

She’s been compared to Bjork, PJ Harvey and Kate Bush, tipped as a potential nominee for the Mercury Music Prize and championed as a front-runner of the alt-folk scene.
On meeting Katy post-performance, she is diligently working her way through a bowl of strawberries and cream, and she tells me her music is best described as “Eton Mess”. 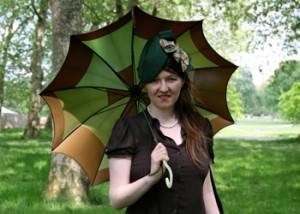 A seeming muddle of ingredients ‘Mozart, Jethro Tull and bird song’ brought together by a particularly English brand of eccentricity.
The past two years have seen a marked shift in Katy’s influences. With her first albums ‘Screwing Lies’ and ‘Passion Play’ emerging from the British folk scene, Katy noted that she drew inspiration in the “history of 300 to 400 years ago”. One notable example is the tale of highwayman Dick Turpin which formed the basis of the riotously odd duet performed with poet John Hegley.
Recently, however, Katy has found herself writing songs based on conversations with her 94 year old grandmother. Her stories of life in the 30s and 40s inspired a passion in Katy for war-time history and culture. She has also taken up the banjolelee, a hybrid of banjo and ukulele, in order to play her granny’s favourite tunes.
Katy’s brand of eccentric folk is increasingly gaining attention, with a gig at the Royal Opera House on 18th July, and a new album due for release in September. Fantastic for those of us who like our music with a “slightly mad” edge but not so great for her boyfriend who was heard lamenting backstage “I’m a folk music widow… can a man be a widow?”
By Serena Sharp
Hybridlab Lost in Paradise – ‘What Katy Did’