Our music team pick the songs or albums, old or new, they just can’t turn off –

Katy Carr Orchidophile How great a word is “orchidophile”? London alt-folkie Katy Carr’s song is delicate, tremulous and accented by a violinist with a light touch, the effect being completely orchidaceous. Caroline Sullivan

DIRECT LINK TO GUARDIAN http://www.guardian.co.uk/music/2011/may/05/playlist-film-and-music-may-6th -2011
Katy Carr Orchidophile How great a word is “orchidophile”? London alt-folkie Katy Carr’s song is delicate, tremulous and accented by a violinist with a light touch, the effect being completely orchidaceous. Caroline Sullivan 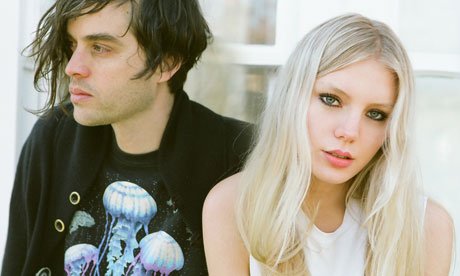 KC Underwood and Alice Costelloe of Big Deal.
Adam Ant Friend or Foe To celebrate the welcome news that Ant is back on stage and dressed as a pirate, too, I’ve gone back to his first solo album, where the double drumming – never louder – was joined by a wall of brass. This title track issues a with-me-or-against-me ultimatum: declining sales suggest the “against” camp won, the fools. Tom Ewing
Peter Hook’s the Light Atmosphere The former Joy Division bassist’s decision to disinter his past will be met by cries of “sacrilege” in some quarters, but former Happy Mondays’ singer Rowetta brings a new serenity and grace to a stunningly beautiful song many might have thought uncoverable. Dave Simpson
Washed Out Eyes Be Closed The Atlanta chillwaver is whipping up a blog storm with news of his upcoming album, Within and Without. This single sets the tone nicely, with its hazy washes of lolloping beats and woozy instrumentation. Chris Salmon Björk feat. Kelis Oceania Her most ambitious project, Biophilia, is just around the corner, and I’ve been drawn into Björk’s vast back catalogue in the anticipation. I’ve stumbled across this fantastically odd duet with Kelis, who adds her husky tones to a remix of Oceania, their voices coalescing perfectly. Michael Cragg
Katy Carr Orchidophile How great a word is “orchidophile”? London alt-folkie Katy Carr’s song is delicate, tremulous and accented by a violinist with a light touch, the effect being completely orchidaceous. Caroline Sullivan
Other Lives For 12 No surprise that these Americans are favourites of American TV montage sequences: they’ve got studious acoustic melancholy down to a tee, with lushness courtesy (presumably) of co-producer Joey Waronker. You know the score: plucked guitar, strings, piano, voice soaring into falsetto whimpering on about how “I’m so far away.” It’s lovely, nevertheless: one of those songs that scratches an itch you didn’t realise you had. Michael Hann
Big Deal Locked Up Big Deal were by far one of the best bands at this year’s Camden Crawl. Locked Up created fizzling chemistry under the disco lights of the Black Cap, with Alice Costelloe (left) and KC Underwood always singing in octaves, never harmonising, like lovers calling to each other from different rooms. Hazel Sheffield
Share: