I escaped from Auschwitz : article in the Guardian with Katy Carr

Kazimierz Piechowski is one of just 144 prisoners to have broken out of the notorious Nazi camp and survive. Today aged 91, he tells his extraordinary story
this is the direct link to the article : http://www.guardian.co.uk/world/2011/apr/11/i-escaped-from-auschwitz 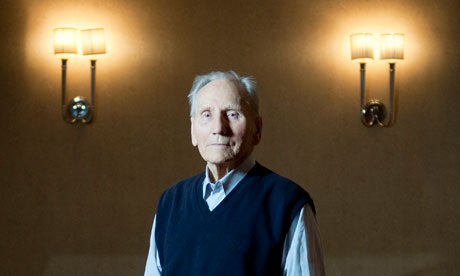 Kazimierz Piechowski in 2011. ‘We just planned that I would play the role of an SS officer so well that the guards would believe me.’ Photograph: Christian Sinibaldi for the Guardian
On 20 June 1942, the SS guard stationed at the exit to Auschwitz was frightened. In front of him was the car of Rudolph Höss, the commandant of the infamous concentration camp. Inside were four armed SS men, one of whom – an Untersturmführer, or second lieutenant, was shouting and swearing at him.
“Wake up, you buggers!” the officer screamed in German. “Open up or I’ll open you up!” Terrified, the guard scrambled to raise the barrier, allowing the powerful motor to pass through and drive away.
Yet had he looked closer, the guard would have noticed something strange: the men were sweating and ashen-faced with fear. For far from being Nazis, the men were Polish prisoners in stolen uniforms and a misappropriated car, who had just made one of the most audacious escapes in the history of Auschwitz. And the architect of the plot, the second lieutenant, was a boy scout, to whom the association’s motto “Be prepared” had become a lifeline.
Almost 70 years later, prisoner 918 is holding forth in the home of the scouting association, Baden Powell House in London. At 91, he is impeccably dressed, with a face as wrinkle-free as his well-ironed shirt. As he accepts the ceremonial neckerchief from a shy girl scout from Lancashire, he is as straight-backed as any of the teenagers on parade. In the UK as the guest of a British singer, Katy Carr, who has written a song about his experiences, he is thrilled when the scouts and guides join her to sing for him. Yet in between the traditional trappings of a jamboree, Kazimierz Piechowski, or Kazik as he likes to be called, will tell them a story few in the UK have heard – how, during Nazi occupation, scouts their age were murdered in the streets, while others like him were sent to concentration camps to witness the horror of Hitler’s Final Solution.
Piechowski had a happy childhood in the town of Tczew, swimming with friends in the nearby river Vistula or playing with bows and arrows in the park with his two brothers. His family were middle class and his father worked on the railways. When he was 10, Piechowski decided to join the scouts – an act that would alter his life for ever. The youth association was flourishing in Poland, a newly independent state set up after the first world war, with a strong focus on patriotism, “toughness” and brotherhood. “I joined because I was patriotic,” he remembers. “And when I arrived home, my mother was crying a little bit and said to me: ‘I am so happy you are on the right way.'”
When the Nazis invaded the country nine years later, in 1939, the scouting movement was seen by the invaders as a symbol of nationalism – and a potential source of resistance. “I was 19 when the war broke out,” Piechowski says. “Four days after Germany declared war, they arrived in Tczew. They started shooting the scouts.” Among those rounded up and killed were Piechowski’s childhood friends, and the teenager was terrified. “I knew that, sooner or later, I would also be killed,” he says, “so I decided to run away.”
He tried to flee across the Hungarian border, a route used by other scouts making their way to France to fight in the Free Polish forces there, only to be caught at the crossing. After eight months in various prisons he was sent to Auschwitz.
“We were only the second transportation to the camp,” Piechowski says, “and we had to help build it.” The old collection of buildings that made up the original concentration camp was not big enough to house all those caught in mass arrests, so inmates were forced to work 12- to 15-hour days to construct a new camp next door that would become notorious asthe Nazis’ biggest death camp.
“For the first three months, we were all in complete shock,” says Piechowski. And it just got worse. From June 1940 and all through the first six months of 1941, the SS were keen to kill inmates – beating them to death with batons – as the simplest way to cope with the camp’s overcrowding. Today, the starvation, unimaginable brutality and physical labour that made the concentration camp a living hell are well documented. But the details of Piechowski’s memories still have the power to shock. Inmates were each given a spoon and a tin bowl – not just to eat and drink from, but also to urinate in at night. “If you lost your spoon, you ate from the bowl like a dog,” he says quietly. “If you lost your bowl, that was it; you did not get any soup.”
Sometimes the guards would murder just to get a holiday, he says. “When an SS man was bored, they would take off a prisoner’s cap and throw it away. They would then order the prisoner to fetch it. As the prisoner was running, the officer would shoot them. Then they would claim the prisoner was trying to escape and get three days off for foiling it.”
How did people cope? “Some prayed, but some who had prayed before they arrived would say: ‘There cannot be a God if Auschwitz exists.'”
For six weeks, Piechowski was set to work carrying corpses after executions. “The death wall was between blocks 10 and 11. They would line prisoners up and shoot them in the back of the head.” At the end there would be a pile of naked corpses and Piechowski would take the ankles, while another man held the arms, and throw them on to carts, to transport them to the crematorium. “Sometimes it was 20 a day, sometimes it was a hundred, sometimes it was more. Men, women and children.” He looks at me fiercely. “And children,” he repeats. 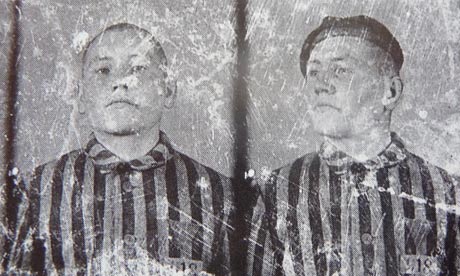