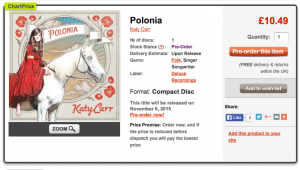 Born in Nottingham to a Polish mother and a Scottish-English father, Katy Carr is a artist (and pilot) unafraid to tackle the big questions of national and personal identity.

Polonia, her fifth album, takes its title from Elgar’s symphonic prelude of the same name, composed for Ignacy Paderewski to benefit the Polish Victims Relief Fund in 1915. Shirley Collins is fleetingly evoked by the title track’s opening line: “Sweet England, am I leaving you behind?” delivered across some magnificent pedal steel playing from BJ Cole.

The core of the record is an examination of World War II’s Eastern Front, and the role of the Polish freedom fighters in securing the freedom of the west, only for their homeland to be ceded to the Soviet Union at the war’s conclusion. These then are difficult themes, but Carr’s facility for a sweeping melody, a lyrical hook, delivered in her soaring voice, makes this an enjoyable listen.

Women war heroines Brigadier General Elzbieta Zawacka (“the most important and decorated female Polish freedom fighter in WWII history”) and Krystyna Skarbek (“the first female agent of the British Special Operations Executive” who “became Churchill’s favourite spy.”) are celebrated in Jumping With Zo – and Christine The Great. Levity is provided in When Charlie Met Pola, which documents Charlie Chaplin’s affair with actress Pola Negri a story which received the speculative newspaper headline, “The Queen of Tragedy To Wed The King of Comedy” (they didn’t).

While the music (superbly arranged and produced by Nigel of Bermondsey) is frequently epic, Carr’s affecting narratives focus on the everyday lives of individual people, like The Mathematician code breakers at Bletchley Park, and Mr Trebus, the elderly, traumatised exile who achieved notoriety when his home and compulsively hoarded possessions were featured on the TV series A Life Of Grime.

With sleeve notes by (Bob Marley and Joe Strummer biographer) Chris Salewicz and artwork and design by Susan Burghart, this is a very desirable artefact, a fascinating insight into Britain’s relationship with its historical closest ally, and a powerful collection of hugely original songs.