Mark Riddaway meets Marylebone-based singer Katy Carr and hears about an Auschwitz escape, her love of flying and meeting Vera Lynn.
Katy Carr’s new album began, she says, with her grandmother. “I’ve got a grandma, she’s 96 years old. When she was about 92, and my grandfather had died, she got very lonely and she would sit in her house and say nothing. Then one day I happened to say, ‘What was the war like grandma?’ and she just opened up.
“I couldn’t stop her speaking. It was just something she really wanted to talk about. Then we got onto talking about the songs of the era. At that time I’d just got into the ukulele and I was able to sit with her and play her these songs – things like Painting the Clouds with Sunshine and George Formby and Sunny Side of the Street, Cheek to Cheek, Sally, all these songs from the 40s. And that’s really where it all started.” 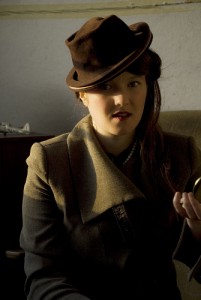