Katy Carr’s music video ‘Polonia’ from her album of the same name released 6/11/2015 made it’s first appearance on the Guardian top videos of November 2015.

Born to a Polish mother and Scottish-English father, Katy Carr has become fascinated by her Polish roots and the country’s history during the second world war. Her last album, Paszport, matched history lessons with strong melodies, and the new set, released this month, broadens the range with stories about Charlie Chaplin and his Polish fiancee or the west’s betrayal of Poland at Yalta. This is the title track, a love song to the country the Romans called Polonia. 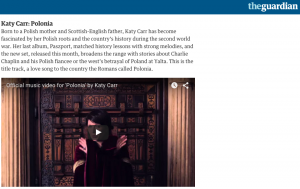